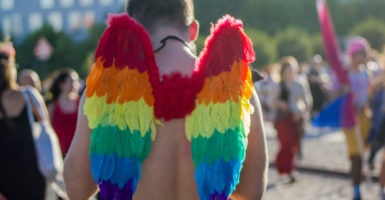 For everyone who’s wondered whether the battle for the under-30 crowd is lost, here’s hope.

In this post-Obergefell world, not every young person is signing up to march in their local pride parade. The first generation to come of age in a same-sex marriage society is finally feeling the effects. And soon, so may LGBT activists.

It’s a surprising headline for The New York Times, but a welcome one for conservatives: “Support of LGBT Rights Drops Among Republicans Under 30.”

In just three years, young conservatives may have some buyer’s remorse about this agenda, which wasn’t supposed to affect them.

Now, in one of the largest declines pollsters on the subject have seen, the number of GOP millennials who think America should give special privileges to people who identify as gay, lesbian, and transgender has fallen from 74 percent to 63 percent.

Yes, it’s still a majority, but, as experts point out, “the shift is striking.”

“It was one of the largest and most significant drops that we saw,” Public Religion Research Institute‘s Robert Jones told the Times.

The survey is significant for several reasons. First, because it’s so large. More than 40,000 Americans were polled on the institute’s LGBT questions.

Then, of course, there’s the social stigma. Some people are just reluctant to tell a pollster how they truly feel about a candidate, party, or issue. That’s why the natural-marriage numbers always polled well under the final tally on a ballot initiative.

It’s also probably why an unconventional candidate like Donald Trump managed to win a historic victory. If these young conservatives are like most other Americans, the number may be significantly lower.

The Times had a hard time explaining the phenomenon. Maybe, reporters speculated, the Republican Party is becoming more “purist” on the issues. Or maybe, as more teenagers grow up in a world where they’re told “tolerance” is changing clothes in front of a half-naked boy, they’re finally seeing the same-sex marriage fallout.

These are young men and women coming of age in a culture that’s prized LGBT extremism above free speech, religious liberty, privacy, sports, and national security.

This is a generation that’s losing scholarships to boys competing as girls. They’re the ones being harassed on college campuses for believing in biological gender—or forced to sue their schools to use the restroom in peace.

They’re the professionals who could lose their jobs for using the wrong pronoun. Suddenly, they feel like the ones in need of protection, not the LGBT activists taking over schools, government, athletics, and business.

Fortunately, they also belong to a party led by Trump. After years of political correctness, his fearlessness on the tough issues is giving more people permission to think for themselves.

This is just a snapshot of how generations change views when they mature and gain wisdom.

Let that be a warning to wobbly Republicans who think pandering on bills like the Equality Act will help them win over younger voters. If the GOP wants to attract more Americans, try taking a page from the president and standing on conviction—no matter which way the political winds blow.