NBC Airs Interview With Julie Swetnick Without Corroborating Her Story 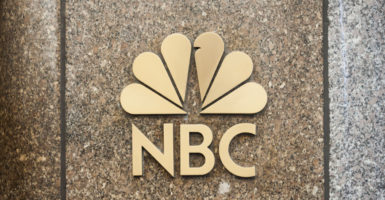 NBC News aired an interview with a woman who said she saw Supreme Court nominee Brett Kavanaugh at as many as 10 teen parties where young women were drugged and gang-raped, although the network was unable to corroborate her account.

“This morning, [Julie] Swetnick provided four names of friends she says went to the parties with him,” NBC News correspondent and weekend anchor Kate Snow said at the end of her interview Monday with Swetnick.

“One of them says he does not recall a Julie Swetnick. Another of the friends she named is deceased,” Snow said. “We reached out to the other two and haven’t heard back. Swetnick says after the alleged attack on her when she was 19, she never returned to those big house parties.”

Kavanaugh has called Swetnick’s allegations a “joke” and a “farce.”

Swetnick, 55, has said she was drugged and gang-raped at one of the parties in 1982, which she alleged took place when she already was a graduate of Gaithersburg High School in Gaithersburg, Maryland. That public school in Montgomery County is about 12 miles north of all-boys Georgetown Preparatory School, where Kavanaugh, 53, went to high school.

Swetnick has claimed she saw Kavanaugh “drink excessively at many of these parties and engage in abusive and physically aggressive behavior towards girls, including pressing girls against him without their consent, ‘grinding’ against girls, and attempting to remove or shift girls’ clothing to expose private body parts.”

In the NBC interview, she did not say Kavanaugh was one of those who raped her, nor that she saw him assault anyone at the parties or spike what she called punch that she said he and others gave to young women.

The interview aired on NBC’s “Nightly News,” with a longer version appearing on MSNBC.

Swetnick, who lives in Washington, D.C., told Snow that she decided to go public with her story about the time allegations from research psychologist Christine Blasey Ford, 51, went public.

Ford, who lives in Northern California, told The Washington Post in a story published Sept. 16 that Kavanaugh held her down, groped her, and tried to remove her clothes in a bedroom during a gathering of six teens in the early 1980s in Montgomery County.

“I started to think back to my days when I was in the early ’80s in Montgomery County, Maryland, and I thought that I might have some information that might corroborate some of the things that she had stated,” Swetnick said in the NBC interview.

Kavanaugh has strongly denied the incident with Ford happened, or that he ever sexually assaulted anyone.

At the direction of President Donald Trump, the FBI is updating six previous background investigations of Kavanaugh by looking into the allegations of sexual assault. Trump reportedly gave the FBI until Friday to complete its investigation.

Sen. Lindsey Graham, R-S.C., called NBC a  “co-conspirator in the destruction of Kavanaugh” when discussing the network’s coverage of  a fourth allegation against Kavanaugh, not Swetnick’s.

“Do you think NBC would have done that if it had been a male, Democratic nominee?” Graham asked Fox News Channel host Sean Hannity in an interview that aired Monday.

This article has been corrected to make it clear which Kavanaugh allegation Graham was referring to in his remarks.