Repression of Religion in China Is Getting Worse. Here’s What Can Be Done. 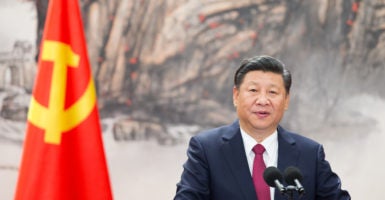 Yeondoo Kim is an ASAN visiting fellow in the Asian Studies Center at The Heritage Foundation.

It’s been a little more than a year now since new regulations on religious affairs went into effect in China in February 2018. Although Chinese people of faith have long faced persecution, last year still marked a notable turning point, as repression increased dramatically.

Under the concept of “Sinicization,” the Chinese Communist Party is attempting to shape religious practice to conform to its own values and priorities.

The president of the Taiwan Association for China Human Rights, Yang, noted that Taiwan has strong provisions in place to protect religious freedom, unlike the People’s Republic of China.

Yang was accompanied by Lee Ming-che, the wife of Lee Ching-yu, who was imprisoned in China after he advocated Chinese human rights.

China unfairly labels Uighurs, he says, as mentally ill people who are “being influenced by extremism, rejecting normal life.”

He explained how the Chinese government is trying to systematically erase Uighur identity through its system of surveillance and political re-education facilities in Xinjiang, where between 800,000 and 1.1 million predominantly Uighur Muslims are imprisoned.

He also warned of the national security threat posed by the Chinese government’s exporting of surveillance technology to other countries.

Mecacci, the president of the International Campaign for Tibet, said Beijing seeks to keep tabs on people’s whereabouts, not unlike the surveillance techniques being used against the Uighurs in Xinjiang.

He said that, with closed-circuit TV cameras and the so-called social credit system, the Chinese Communist Party could mold human behavior toward that of “good citizens,” in the style of “Big Brother” in George Orwell’s famous novel “1984.”

Mecacci was also critical of China’s plan to designate the next Dalai Lama, which is a role usually determined by Tibetan Buddhists.

When asked what can be done, panelists agreed on the importance of the international community taking action. Turkel said, “Public naming and shaming is one of the most important tools,” because China is protective of its image on the world stage.

Mecacci noted that there are approaches to the problem in addition to sanctions, including demanding reciprocal access to travel and to disseminate information in restricted areas of China.

Yang said that Taiwan could help Chinese people through radio broadcasts from Taiwan.

Fu pointed out that the international community should do more to support people suffering from religious persecution.

The Heritage Foundation has long called on the U.S. government to sanction violators of religious freedom in China under the Global Magnitsky Act, which enables the Treasury Department to target individual or entities on human right grounds.

Those directly responsible for undermining one of the most fundamental human freedoms should face consequences for their actions.

The conference highlighted the severity of China’s violations to religious freedom—irrespective of the particular religion.

It emphasized how people of different faiths and nationalities can work together to fight for their religious freedom, because as Fu noted, “to attack and persecute one group is to attack all of us.”