Internet Governance CEO Under Fire for Role in Chinese Conference 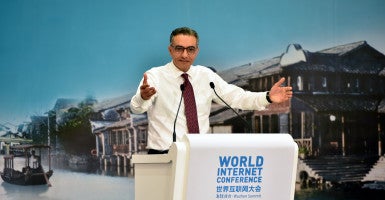 Three senators have challenged the head of a U.S.-funded Internet management organization to show that his leadership role in a Chinese-run conference doesn’t conflict with his commitment to an open Internet.

Sens. James Lankford, R-Okla.; Ted Cruz, R-Texas; and Mike Lee, R-Utah, last week sent a letter to Fadi Chehadé, chief executive officer of the Internet Corporation for Assigned Names and Numbers (ICANN), inquiring about an apparent conflict of interest posed by his co-chairmanship of an advisory body for the upcoming World Internet Conference.

In their letter, the senators say Chehadé’s affiliation with the annual conference organized by China could represent a conflict of interest because of ICANN’s contractual relationship with the federal government. They write:

ICANN’s participation in the World Internet Conference is especially concerning because of the Chinese government’s long and established record of restricting free access to the Internet, censoring content, and criminalizing certain forms of online speech.

In a public meeting last week, Chehadé dismissed the Republican senators’ letter as being “about politics.”

Chehadé announced in December that he will leave ICANN in March and take a post as co-chairman of the advisory committee for this summer’s World Internet Conference, the third such gathering organized by the Chinese government.

“My goal is to continue to advocate for global multi-stakeholder governance and a single, open, and interoperable Internet. To avoid any misunderstanding, I wish to confirm again that I have accepted this future role in my personal capacity,” Chehadé said in his resignation announcement.

‘Give Voice to a Billion People’

ICANN is a nonprofit organization contracted with a division of the U.S. Department of Commerce to administer functions associated with the Internet’s domain name system, the results of which can help shape brand identities and ease online searches.

The Commerce Department’s National Telecommunications and Information Administration intends to transfer oversight of domain names to the Internet’s “global multistakeholder community.” But amid controversy over the Obama administration move, the agency last year extended its contract with ICANN to the end of September 2016.

In a statement sent Thursday morning to The Daily Signal, Chehadé said he would “step out of my advisory position” to the Chinese-run conference if it compromised his commitment to “inclusivity.”

Referring to China, he added: “If we really are inclusive, then it’s important that we find a way to give voice to a billion people.”

The ICANN chief’s complete statement to The Daily Signal:

It is important to note that I will assume the advisory committee role with the World Internet Conference (WIC) as an individual, not as the ICANN CEO and only after I have left ICANN next month. My position on the advisory committee to the WIC, along with other members involved in Internet governance, U.S.  business, civil society and others, is part time. This is an unpaid position, where I get absolutely no remuneration.

I am firmly committed to the inclusive multistakeholder model and that will extend beyond my tenure at ICANN. My work with the advisory committee is an extension of that and I invite everyone to join me in this mission. If we really are inclusive then it’s important that we find a way to give voice to a billion people. And if the committee proves not to support that inclusivity, I will step out of my advisory position.

Cruz, Lankford, and Lee request that Chehadé, who took over ICANN in 2012, confirm or deny his attendance in December at a World Internet Conference advisory committee meeting. Chehadé attended the first and second gatherings of the World Internet Conference in 2014 and 2015, according to reports.

The senators’ letter demands that Chehadé clarify his relationship with the conference and whether he believes that his leading role makes ICANN “complicit in the Chinese censorship regime.”

The senators ask Chehadé to respond by Feb. 19.

“China is home to the largest number of Internet users and a vital, innovative and competitive Internet industry,” Chehadé told China Daily in the lead-up to the 2015 conference. “China has started to gradually take a leading role in the discussion on global Internet governance and a truly inclusive global Internet governance system will be impossible without the participation of China.”

The Chinese government has organized an annual World Internet Conference since 2014. China operates the world’s most sophisticated online censorship system, nicknamed the “Great Firewall,” according to Reuters.

CNN reported that Xi said the international community should “respect the right of individual countries to choose their own path to cyber development, model of cyber regulation and participate on the same footing.”

The free-press group Reporters Without Borders and China censorship watchdog GreatFire.org called for a boycott of the conference.

Representatives of some of the largest U.S. tech companies—including Facebook, Microsoft, and IBM—attended last year.

“It was unfortunate that the CEO of ICANN chose to lend his credibility and stature to the Chinese effort, and the questions the senators ask are worth having answers to,” Paul Rosenzweig, founder of the homeland security consulting company Red Branch Consulting PLLC and a senior adviser to the Chertoff Group, told The Daily Signal.

Rosenzweig has authored a series of articles on ICANN’s contractual relationship with the U.S. government.

Chehadé also said  he would correct the letter’s “mistaken characterization” in a formal response by clarifying that his advisory role for the conference “was not done in my ICANN capacity and that the advisory council has not met yet.”

According to a report by the Chinese state news agency Xinhua, however, the committee met in December on the sidelines of the World Internet Conference.

Chehadé also said last Friday that he would deny any possibility of personal gain, which he said could constitute a conflict of interest. Observers should “resist the temptation” to politicize ICANN’s transition process, he said, adding:

Let’s instead stay focused, as I said in the last mile, on doing our work. And yes, we will answer fully and clarify the issue of how procedures were followed and what procedures were followed. We will do that. But let’s resist bringing the politics of our lovely capital into this process, this global process that has been perfect.