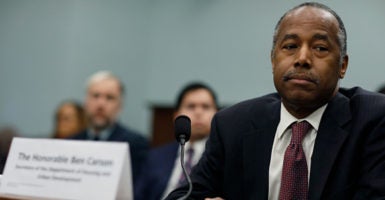 Carson, who has pushed many reforms on federal housing policies, shared with The Daily Signal his plans for making housing more affordable in the United States and lifting more Americans out of poverty.

Here are three agenda items the HUD secretary says he is working on during 2019:

The Trump administration’s proposed work requirements for welfare programs would help revamp a public housing system that has trapped many Americans in poverty for generations, Carson said in an interview with The Daily Signal.

“Right now, one of the things that has been very apparent to me as I’ve traveled around the country, and go to public housing sites, and meet people who have been there for 20, 30, 40, 50 years, who have intergenerational habitation there,” Carson said, “there’s really no effort being made to provide them a mechanism to get out of there and to become self-sufficient.”

Under Trump’s budget proposal for HUD, able-bodied adults getting rental assistance would be required to work at least 20 hours per week or attend job training or education classes. The requirement doesn’t include the elderly or disabled.

“Our new rental proposals are helping to move people in the direction of self-sufficiency by helping to do things like assessing their incomes every three years, instead of every one year, so that you are not immediately deemed [ineligible] as soon as you start making more money, or bring an income-producing person into your environment,” Carson said.

“We’ve been extremely careful to make sure that none of the people who were assisted in housing were affected by the budget,” Carson said. “So, there is enough to make sure that all those people are taken care of. What we’re really distinguishing between are needs and wants.”

Carson said that criticism that HUD was raising rents on the poor is “garbage.”

Under Carson, a public-private partnership program to get private funds to renovate dilapidated public housing structures has reached more than 100,000 units and drew $5.8 billion in private investment.

Carson said that HUD has accelerated the Rental Assistance Demonstration program, begun in the Obama administration, because it has been a good deal for taxpayers while increasing affordable housing for the needy.

“There were a lot of public housing facilities that were deteriorating because the government’s old way of doing things was to come in and build this big, multifamily thing with no support around it, and disappear and go off to the next project, while it immediately started deteriorating,” Carson said.

“As a result of that, the capital needs of these places just continued to increase to the point where we were looking at $26 billion of deferred maintenance.”

The Government Accountability Office released a report in February 2018 that said HUD should do a better job of tracking the system and tenants.

“Without a comprehensive review of household information and procedures for fully monitoring all resident safeguards, HUD cannot fully assess the effects of [the Rental Assistance Demonstration program] on residents,” the report said.

According to HUD, about 210,000 people moved into improved units, and if residents need to temporarily move during the construction period, they are entitled to protections under both the Uniform Relocation Act and the Rental Assistance Demonstration program’s relocation rules. The department has worked to address the GAO concerns by updating data gathering to avoid risks, and monitoring residents’ rights and safeguards.

Before the program was in place, about 15,000 units were demolished or otherwise removed from the public housing listings per year, according to HUD. The rehabilitation of buildings often includes construction to mitigate health hazards, such as lead paint, and to make the buildings accessible to those with disabilities.

Carson said it would have taken the federal government 46 years to generate the near $6 billion in private capital renovating the units, noting that the program created 108,000 jobs.

The original cap on capital investment was for no more than 255,000 units, later raised to 455,000 units. The Trump administration’s budget proposal is asking to remove the cap entirely, so as not to limit any private investment.

Cabrini-Green Homes in Chicago’s Northside drew national attention—before being demolished beginning in 1995—became emblematic of this government failure. Safe, affordable housing need not be synonymous with slums and violence.

The success of hundreds of thousands of pleasant—privately owned—middle-class neighborhoods across the nation bears testament to this. The RAD program promises a transition—albeit only a partial one—away from the worst ills of government-owned public housing.

3. Deregulating a Path to Affordable Housing

“In terms of what we’re talking about, regulatory and zoning restrictions for single-family homes, you’re adding 25 [percent to] 27 percent to the cost,” Carson said. “So, that’s huge. For multifamily, you’re talking 32.1 percent on average; in a quarter of cases, up to 42 percent. So, you’re talking huge numbers here.”

Carson referred to Fort Worth, Texas, as a city that has been receptive to changing zoning laws and other regulations to make housing more affordable.

After speaking to mayors of both parties, he said, he found bipartisan consensus in local governments to ease regulations.

“A lot of local municipalities, knowing that we are moving in that direction, have already started to look at the regulatory burden and started working on it,” Carson said. “I think everybody understands it’s a problem. Just, in many cases, it hasn’t risen to the top of the list of things that need to be done.”

“So, we are just encouraging people to elevate [deregulation] in importance, because affordable housing affects a large number of people in our country,” he said.

The HUD chief said 8.3 million families pay 50 percent or more of their income for housing, or live in substandard housing, or both.

This is a problem that Heritage’s Griffith said he is glad to see HUD acknowledge.

“It’s promising that those at HUD recognize the onerous regulations at the local level contribute to higher housing prices,” Griffith said. “While we recognize the federal role in local regulations is limited constitutionally—and it should be—the federal government should not incentivize these policies.”

Carson said some zoning regulations were spawned by a “not-in-my-backyard” attitude called “NIMBY-ism.”

“A lot of the regulations exist because people want to maintain the character of their neighborhood—NIMBY-ism,” Carson said. “But NIMBY-ism is based on misconceptions that the government is going to come in and build something like they did in the ’60s or the ’70s, with no support and no forethought.”

“Of course, we don’t do that anymore. Now, it’s all public-private partnerships,” he said. “We look at the character of the neighborhood. We make it fit in. We don’t take a multifamily building and stick it in the middle of an established block.”

“We’re not going to do those kind of things.”