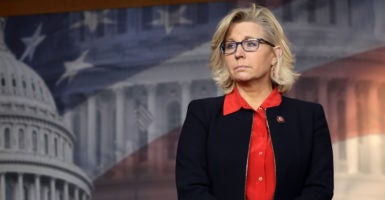 “The world does need more Cowboys,” Cheney told The Daily Caller News Foundation. “Cowboys and cowgirls embody the no-nonsense, never-back-down grit at the heart of our Wyoming heritage.”

The cowboy has long been the University of Wyoming’s logo and mascot, however, outrage ensued after the college released a promotional video in July that introduced the new tagline “The World Needs More Cowboys.” Nearly two dozen faculty members have complained since its release, claiming it represents bigotry and genocide.

Tracey Owens Patton, a communications professor, accused the cowboy of “erasure, racism, sexism, heterosexism, and genocide,” reported The Wall Street Journal. The University of Wyoming’s Committee on Women and People agreed, noting that it “risks casting UW as a place where only people who identify with white, male, and able-bodied connotations of ‘cowboy’ belong.”

The promotional video, which lauds grit, courage, and self-reliance, also explains what makes a cowboy and addresses the inclusiveness of the logo despite the criticism otherwise.

“The world needs more cowboys and not just the kind that sweep you off your feet and ride you off into the sunset—ours are diverse cowboys who come in every sex, shape, color, and creed,” the video outlines. “It’s not what you are that makes you a cowboy or cowgirl, but who you are. It’s a shared spirit. It’s the spirit of the underdog, the trailblazer.”

“Washington could learn a lot from Wyoming’s values of courage, leadership, and hard work, and those principles are exemplified in the University of Wyoming’s slogan,” Cheney added.

The university has also defended the slogan and will continue to use it for the upcoming year.

“While we recognize there are some who don’t like the tagline, the response to our campaign has been overwhelmingly positive, and we are making plans to continue with the campaign for a second year,” Chad Baldwin, associate vice president for marketing and communications for the University of Wyoming, told The Daily Caller News Foundation.