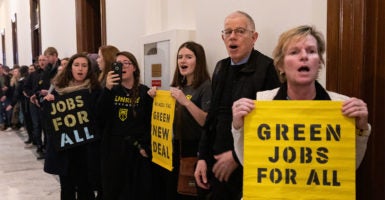 Members of a group called The Sunrise Movement stand outside Senate Majority Leader Mitch McConnell's, R-Ky., office during a rally in favor of the Green New Deal in Washington, D.C., on Feb. 25. (Photo: Aurora Samperio/NurPhoto/Getty Images)

The florid Green New Deal proposed by newly elected Rep. Alexandria Ocasio-Cortez, D-N.Y., has been widely panned by critics on both the right and the left–but perhaps most notably by Democratic Senate Minority Leader Chuck Schumer, D-N.Y.

What many critics of the deal fail to note, however, is that the supposed “New Deal” is the Democrats’ most recent attempt to co-opt President Donald Trump’s populist agenda.

The Green New Deal seeks to achieve on paper what the laws of both physics and economics would not allow in practice: It is attempting to appeal to the strength of the American worker while at the same time discouraging American industrialism.

But before we get ahead of ourselves, let’s take a look at the not-so-green origins of this stale, almost comical idea.

President Trump’s 2016 campaign slogan, “Make America Great Again,” has been a wildly powerful rallying cry for his largely blue-collar Rust Belt base. For them, the slogan stands for secure borders, unfettered enterprise, and fair trade.

This singular fact shows it was not Trump’s allegedly “bigoted” rhetoric that attracted these voters–most of whom helped elect America’s first black president just eight years prior to Trump’s election–but Trump’s promise to restore prosperity to their dying industrial towns.

Although, in their hearts of hearts, Democrats know that economic factors drove traditionally Democratic voters to elect Trump, they do not have a plan of their own to restore economic prosperity to wide swaths of the U.S. population. Rather, they do have a plan, but it is not a new one.

The Democrats’ plan is the same as it has always been: the Robin Hood strategy. That is, they want to steal from the rich and give to the poor. That’s why the Green New Deal is based almost entirely on cost-shifting, taxation, and wealth redistribution rather than job creation and sound industrial policy.

And here’s the proof: Rep. Ocasio-Cortez celebrated her “successful” attempt to prevent Amazon from building a new headquarters and flagship distribution center in New York City. Let that sink in for a minute. Democrats are celebrating the fact that their constituents will not be the recipients of a major job boom–in a community that desperately needs jobs.

Amazon was guaranteeing New York 25,000 jobs up front and up to 50,000 jobs over the next two decades, not to mention more than $27 billion in state government tax revenues. New York Gov. Andrew Cuomo, who knew just how beneficial Amazon’s proposed headquarters would be for the state, made the highly unusual move of openly criticizing Democrats in the New York Legislature who killed the deal.

The three-term governor called the plan’s demise “the greatest tragedy that I have seen since I have been in government.”

The irony here is that Amazon and its CEO, Jeff Bezos, were actually trying to reward Democrats by placing their headquarters in Long Island City, New York, which, historically, has been one of the least business-friendly places in the country. Amazon could have easily–and far more profitably–built its new headquarters in Bethlehem, Pennsylvania, or Lansing, Michigan, for example.

But this was always more about optics than about a practical job plan.

This leads us to the second prong of Trump’s populism and Democrat’s failing plans to incorporate it into their dumb new deal: that is, making the American worker more globally competitive by negotiating strong trade deals.

Trump’s trade sanctions against China and other grossly unfair trading partners are trying to address a lopsided trade regime that has lasted almost 50 years. President Bill Clinton offered a compromise in the form of the North American Free Trade Agreement, which he claimed would enable the American worker to get a bigger piece of the manufacturing pie than if China were left unfettered.

At the end of the day, the agreement did very little to stem the declining tide of American manufacturing and may have even hastened its demise.

Trump has worked diligently to put new deals in place, including ongoing negotiations with China, which he forced by imposing massive trade sanctions, as well as with the European Union. The president has also negotiated more labor-friendly deals with Mexico and Canada.

The Green New Deal similarly wants to privilege American manufacturing by incorporating protectionist trade policies. But here’s where the proposed legislation takes a sharp left turn. The Green New Deal’s proponents want to prevent job-killing imports from China and other countries, but they also call for the replacement of those imports with a massive investment in so-called clean manufacturing in the United States.

This is a fantastical idea. The heavy manufacturing sectors that have caused the trade imbalance in the U.S. are based on extraction industries such as steel manufacturing and energy harvesting (natural gas, oil, and other fossil fuel extraction). Those are not so-called “clean” industries, and they never will be.

But Democrats want to have their cake and eat it, too. They believe they can have plentiful clean energy on the cheap–if only government would get in on the game and make massive taxpayer-funded investments in unproven technologies.

At the end of the day, it all comes down to the tried-and-failed laws of centralized command and picking winners and losers. Obama tried this out during an energy crisis in this country, and most of the renewable energy projects he threw money at failed miserably, leaving taxpayers on the hook for billions of dollars in loan guarantees.

This so-called Green New Deal is only new in the sense that it offers to waste even more taxpayer money.