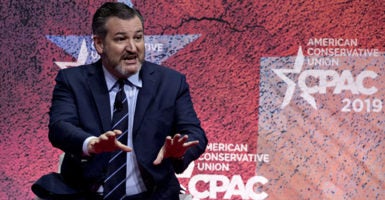 Sen. Ted Cruz, R-Texas, said Friday that he urged the Trump administration and his fellow Senate Republicans to make a strong push for the border wall while the GOP still controlled both chambers of Congress.

Cruz recalled telling colleagues this during an August presentation, which he recalled was 183 days before the midterm elections, when Republicans lost their House majority.

Cruz asserted that the November elections would have turned out differently had his colleagues listened:

I want you just to imagine, if they had taken that advice, if we had had that fight, and you had seen Elizabeth Warren screaming on the Senate floor to stop it, Bernie Sanders pulling what little hair he has out of his head, if in September or October, it [had] culminated in Republicans’ standing together [in] funding and building the wall, I’ll tell you, I don’t think we would have lost the House of Representatives.

In an interview onstage at CPAC, National Review Editor Rich Lowry asked Cruz why the Republican-controlled Congress in the first two years of the Trump administration didn’t fund the wall. Instead, the outgoing House Republican majority voted to fund the wall after Democrats won the House majority in November.

This led to a partial government shutdown for 35 days, and to President Donald Trump’s declaring a national emergency to access available government funds, mostly from the Defense Department, for the wall.

As Cruz talked, someone from the crowd shouted for him to answer the question about the wall.

“I’m getting to that,” Cruz said. “There’s good and bad. I’m going to talk about the good first.”

He then explained how he pushed, to no avail, for funding the wall before the election in what he considered the likely event of Republicans’ taking a loss.

In August, he made a presentation for colleagues titled “Seize the Day,” Cruz said:

I did a long presentation with Senate Republicans that said: Look, if you look at history, unified control of the federal government—both houses of Congress and the presidency—is exceptionally rare for Republicans. It has happened a total of eight years since World War II.

I said, everyone realizes there is a good chance we are going to lose at least one house of Congress in November.

Cruz said he pushed for budget reconciliation, a procedure allowing spending bills to bypass the regular legislative system that makes measures subject to a Democratic filibuster.

“With 183 days left to legislate, let’s do that,” Cruz recalled saying to other GOP senators. “What I urged [is], let’s use vehicles the Democrats can’t filibuster. In particular, let’s use something called budget reconciliation, which you all will remember is the vehicle that we used to pass the tax cut in 2017. What matters about reconciliation is that it’s immune from filibuster, so that you can pass legislation and the Democrats can’t stop it.”