US Won’t Take Back Alabama Woman Who Joined ISIS 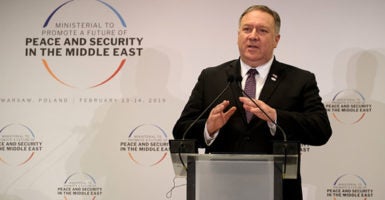 Secretary of State Mike Pompeo, seen here Feb. 14 in Warsaw, Poland, at the conclusion of the Ministerial to Promote a Future of Peace and Security in the Middle East, on Wednesday said the U.S. would not allow back into the country a woman who joined ISIS now being held in a refugee camp in Syria. (Photo: Sean Gallup/Getty Images)

Secretary of State Mike Pompeo said Wednesday the United States would not allow an American-born woman who joined the Islamic State terrorist group back into the country.

In 2015, Hoda Muthana, then 19, gained national attention for leaving her family in Birmingham, Alabama, to join the Sunni Muslim extremist group.

Now, the remorseful 24-year-old is seeking to return to the United States with her 18-month-old son. She escaped from the Islamic State, but was captured by Kurdish forces and is being held at a refugee camp in Syria.

President Donald Trump tweeted Wednesday, “I have instructed Secretary of State Mike Pompeo, and he fully agrees, not to allow Hoda Muthana back into the Country!”

Muthana reportedly said on her Twitter account in 2015 that Americans must commit violence against each other on national holidays.

“Americans wake up! Men and women altogether. You have much to do while you live under our greatest enemy, enough of your sleeping!” she wrote.  “Go on drive-bys, and spill all of their blood, or rent a big truck and drive all over them. Veterans, Patriots, Memorial, etc day … Kill them.”

However, she recent told The Guardian newspaper: “I believe that America gives second chances. I want to return, and I’ll never come back to the Middle East. America can take my passport, and I wouldn’t mind.”

The State Department in its statement did not give a clear explanation of why Muthana, born in 1994 in Hackensack, New Jersey, was not a legal citizen.

U.S. Citizenship and Immigration Services says children born in the United States to accredited foreign diplomatic officials do not gain birthright citizenship, according to Fox News.