Military Members Should Fight Dangers Abroad, Not in Their Own Homes 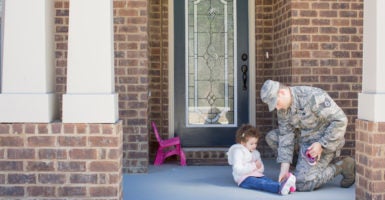 Despair filled the eyes of the mother next to me in the Senate committee hearing room as she showed me a picture of her son.

She explained he will need lifelong medical care because she was unknowingly exposed to lead paint and mold in her home during her pregnancy.

To my surprise, she wasn’t living in a poorly managed apartment complex. She lived in government-contracted base housing with her husband, a member of the U.S. military. While her story is heartbreaking, it’s not unique, and Congress and the military must insist that it never happen again.

Since it began in 1996, the Military Housing Privatization Initiative has been instrumental in improving military housing. The military undertook the initiative because almost half of its housing supply needed extensive repair, but it lacked the necessary funding in its budgets to undertake a major refurbishment program.

The initiative provided newer housing faster than the military alone could have, and 45 percent of families surveyed had a positive or neutral experience with base housing.

Despite these improvements, shockingly, at least hundreds of families still live in substandard, privately managed homes with mold, lead paint, rats, and other hazards.

News of those hazards and subsequent chronic health issues caused enough outrage on the part of legislators to prompt a congressional hearing.

On Feb. 13, the Senate Armed Services Committee conducted a hearing to investigate those circumstances. The hearing was a strong first step in redressing the grievances that several military families have endured throughout their time in privately contracted base housing.

The first witness panel included three military wives who encountered various physical and financial stresses living in base housing. The second panel consisted of executives from five private housing companies with whom the military has contracts. The third was a group of Defense Department officials who oversee those contracts.

During their testimony, the wives described living in base housing with toxic black mold growing in the walls and floors and repairmen who admitted that they weren’t fixing the problems. The women were unwittingly exposed to toxins, resulting in months of seemingly incurable illness for them and their families.

No one should have to live in substandard conditions—especially not the men and women who dedicate their lives to serving our nation.

In the civilian world, residents can sue landlords at the first sign of contamination. But military spouses often had no recourse. Responses from the housing representatives were often hostile, and some even accused residents of lying or retaliated against them.

During the hearing, congressmen suggested several ideas for increasing contractor accountability and ensuring systemic change, which the contractors and the Department of Defense appeared amenable to.

One suggestion was to permit families to withhold their housing stipend from contractors if they have unresolved issues with their homes. Other ideas included restructuring the system to simplify complaint resolution and eliminating monetary incentives that discourage contractor employees from reporting unsafe conditions.

One day after the hearing, President Donald Trump announced that he would divert $3.6 billion from the military construction budget to build the border wall.

Critics assumed it meant the money would no longer be available to improve military housing conditions, but fortunately, they were incorrect.

Acting Defense Secretary Patrick Shanahan stated on Tuesday that military housing repair is a “priority” that he “will not consider jeopardizing” by defunding it to build the wall.

No one joins the military to live in a mansion, but as this hearing highlighted, some service members currently live in a toxic pit.

Military housing has significantly improved since 1996, when the military realized it lacked sufficient funds to upgrade housing on its own.

However, Congress must work with the Pentagon and contractors to further improve that housing as soon as possible, so that thousands of military families can avoid dangers in their own houses.