Medicare’s Financial Condition Is Getting Worse. Here’s What Trump and Congress Can Do. 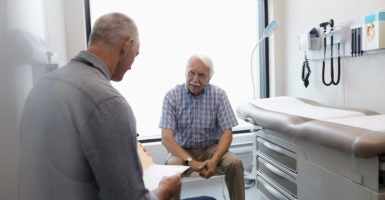 Medicare Part A's hospitalization trust fund is set to be insolvent by 2026, according to Medicare trustees. (Photo: Hero Images/Getty Images)

The financial condition of Medicare—the huge program that covers over 58 million beneficiaries—is deteriorating. The president and Congress are legally required to address the problem this year.

For the taxpayers, it’s essential that they slow the growth in Medicare spending. For the beneficiaries, they can improve the program’s overall performance, benefit structure, and financial condition so as to preserve Medicare for the future.

In their 2018 report to Congress and the president, the Medicare board of trustees estimated that the Part A hospitalization trust fund—though financed by a steady stream of federal payroll taxes—is headed for insolvency by 2026. That means the program will not be able to pay for all of the legally prescribed hospital benefits.

Only a quarter of Medicare’s physician and drug costs are covered by premiums paid by beneficiaries and other “dedicated” revenues. The other three-quarters are covered by taxpayers through general revenues (federal income and business taxes) drawn from the Treasury. And those costs are only rising.

Taxpayers have a big problem. The Medicare trustees project that the transfer of general revenues into the program will more than double from an estimated $315.2 billion in 2018 to $632.6 billion in 2027. Looking ahead, they estimate Medicare’s share of total federal business and income taxes will climb from 15.2 percent in 2017 to 23.6 percent in 2040.

Meanwhile, Medicare and other federal entitlements are driving federal deficits and debt to historically high levels. The Congressional Budget Office reports, “Those large budget deficits would arise because outlays—particularly for Social Security, Medicare, and interest on the debt—would grow steadily under current law, and revenues would not keep pace with those outlays.”

Enacting the Medicare Modernization Act of 2003, Congress anticipated the potentially negative impact of rapidly rising Medicare spending on the federal budget. Thus, current law requires the Medicare trustees to issue a Medicare “funding warning” if they determine (in two consecutive years) that general revenues would exceed 45 percent of total Medicare spending within a seven-year period.

In their 2018 report, the trustees made such a determination and formally issued the Medicare “funding warning.” Under the law, the president must submit a legislative proposal to Congress in response to the warning within 15 days of submitting his fiscal year 2020 budget proposal. The Congress, in turn, must consider the president’s legislative proposal, or an alternative measure, on an expedited basis.

To the advantage of beneficiaries, The Heritage Foundation (among others) recommends combining Medicare Parts A and B, while guaranteeing seniors protection from the costs of catastrophic illness and reforming the program’s complex and cumbersome cost-sharing arrangements. This would not only simplify the program and make out-of-pocket costs predictable, but would also guarantee seniors peace of mind. The Congressional Budget Office estimates that such a change would yield $116 billion in savings over 10 years.

To the advantage of beneficiaries and taxpayers alike, the president and Congress could bring Medicare’s age of eligibility into line with Social Security at age 67. This would not only encourage older Americans to continue to deploy their talents and experience in the workplace, but would also provide some relief to the taxpayers. The Congressional Budget Office estimates a 10-year savings of $42 billion.

Taxpayers would also benefit if the president and Congress phased down taxpayer subsidies for the wealthiest Medicare recipients, securing, according to Heritage analysts, a one-year savings of $28 billion. They could also gradually raise the share of beneficiary premiums from 25 to 35 percent of total premium costs. The Congressional Budget Office estimates that such a change would yield a 10-year savings of $389 billion.

For beneficiaries and taxpayers alike, the best long-term option, developed by Heritage and others, would transform the entire Medicare program into a robust system of beneficiary choice and health plan competition (including traditional Medicare), funded on a defined contribution basis, not unlike the popular and successful Federal Employees Health Benefit Program. Seniors would thus be able to choose among a variety of plans offering comprehensive and guaranteed benefits at competitive prices.

Such a market-driven program would be superior all-around—stimulating innovation while also securing better value for health care dollars.

This year, Congress and the president have a legal obligation to address Medicare’s financial conditions, but they also have a major opportunity to improve the performance of the program for current and future Medicare beneficiaries and taxpayers alike.

Inaction Is a Pricey Alternative

The Medicare trustees estimate that over the next 75 years, Medicare’s unfunded obligations will amount to $37.7 trillion. That’s the dollar estimate of the cost of all promised benefits not paid for through payroll taxes, beneficiary premiums, or other “dedicated” revenues.

If, however, the trajectory of Medicare spending follows a more likely set of assumptions based on policy rather than current law, the program’s long-term unfunded obligations would amount to $47.3 trillion, according to the Medicare Office of the Actuary.

The Medicare trustees have done their job—they issued their warning in accordance with their legal obligations. Now, it is up to the president and Congress to respond. It is not just a good idea. It is not simply good public policy. It is the law.

This article has been corrected to reflect that a quarter of Medicare physician and drug costs are paid for by beneficiary premiums.