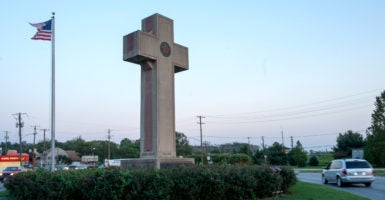 On Feb. 27, the Supreme Court will consider whether the Peace Cross honoring fallen soldiers from World War I violates the First Amendment's establishment clause. (Photo: The Washington Post/Getty Images)

The Supreme Court is back in session after a monthlong break. All eyes likely will be on Justice Ruth Bader Ginsburg, who returns to the bench after missing the January sitting for oral arguments.

Ginsburg reportedly joined her fellow justices for one of their closed-door meetings last Friday, but this will be her first major appearance in 2019. The justices will hear a number of important cases, including a major First Amendment establishment clause challenge and a case that could have implications for social media giants, such as Facebook and Twitter.

Here’s a look at a couple of cases you won’t want to miss.

Does a World War I Memorial Violate the Establishment Clause?

In the American Legion v. American Humanist Association, the Supreme Court will weigh in on whether a state’s maintenance of a 93-year-old World War I memorial that includes a 40-foot cross is an “establishment of religion” in violation of the First Amendment.

While the Constitution’s command that “Congress shall make no law respecting an establishment of religion” is straightforward, the Supreme Court’s establishment clause jurisprudence is anything but clear.

To determine whether a government action runs afoul of the First Amendment, the Supreme Court has developed a number of tests, looking for “excessive entanglement” of government with religion, an endorsement or disparagement of a particular faith tradition, or government coercion, while also weighing the history and context of the challenged religious practice or display.

The Supreme Court has applied these tests inconsistently, giving the lower courts little guidance about how and when to apply the various tests. All this leads to unpredictable results.

The fact that the Supreme Court took up the American Legion case might be a signal that a majority of the justices agree with Thomas.

In the case at hand, the U.S. Court of Appeals for the 4th Circuit held that the war memorial, the Peace Cross in Bladensburg, Maryland, violates the establishment clause, concluding that the size and prominence of the cross convey government endorsement of Christianity and that the state’s maintenance of the cross is an excessive entanglement with religion.

One of the judges went so far as to suggest a way to “fix” the establishment clause problem would be to cut off the arms of the cross. A dissenting judge wrote that displays on government property may incorporate religious elements if they serve a legitimate secular purpose, such as honoring local soldiers who fought and died in World War I.

The American Legion puts the issue in perspective, offering: “If a century-old war memorial that is only in government hands because of traffic safety considerations arising 40 years after it was built is unconstitutional, it is difficult to conceive of any cross-shaped monument that will survive.”

At the Supreme Court, the American Legion argues that it’s a stretch to claim the state’s minimal expenditure of funds for upkeep and maintenance (roughly $117,000 since the state acquired the memorial in 1961) is an excessive entanglement with religion.

The veterans group contends that the Supreme Court should clarify what the appropriate test is for judging establishment clause claims, urging the justices to adopt the coercion test (asking whether the government used its power to force particular religious beliefs or practices on its citizens, or to require financial support for a particular religion) and to jettison the others.

The Maryland-National Capital Park and Planning Commission, the state agency charged with the memorial’s upkeep, also points to the long tradition of using crosses to memorialize troops who have died defending our nation.

The commission argues that this memorial is constitutional under any of the tests previously employed by the Supreme Court.

Will the Supreme Court seize the opportunity to clarify its establishment clause jurisprudence, or will it take a narrower path to resolving the challenge over this particular war memorial?

We’ll get a preview of what the justices are thinking at the oral arguments on Feb. 27.

Does the Free Speech Clause Apply to Private Companies?

The First Amendment provides that “Congress shall make no law … abridging the freedom of speech,” and the Supreme Court extended that prohibition to the states through the due process clause of the 14th Amendment.

In this case, the Supreme Court will consider whether a New York public-access cable TV channel functioned like a state actor when it banned a video containing threatening language.

The Manhattan Community Access Corp., a nonprofit company, operates four public-access channels independently from the local government, making all decisions about what programming to run.

It suspended media gadfly Deedee Halleck and East Harlem poet Jesus Papoleto Melendez from airing programs on one of the company’s public-access cable channels after the pair produced a video that contained threatening language that violated the corporation’s regulations.

Halleck and Melendez went to court, claiming that the corporation is a state actor and had violated the First Amendment by censoring their content.

The district court ruled that the corporation is not a state actor, but on appeal, the U.S. Court of Appeals for the 2nd Circuit disagreed, finding that a “public access channel is the electronic version of the public square,” and is therefore a state actor.

Now before the Supreme Court, the corporation argues that the appeals court failed to analyze whether it’s a state actor, focusing instead on the fact that it operates a forum for public speech open to the general public.

As the Chamber of Commerce points out in its amicus brief supporting the corporation, “Businesses routinely open up their private property for speech by members of the public … and the First Amendment has ‘no part to play’” unless that business meets the test for state action.

Lurking in the background of this case is the fact that a ruling that public-access channels must comply with the First Amendment could have implications for Facebook, Google, YouTube, Twitter, and other modern equivalents of the “public square.”

With the revelation that many of these companies target and censor conservatives on their platforms, there have been some calls for First Amendment constraints on these social media giants.

This case could shed light on how much control private companies have over content on platforms they own and operate.

The court will hear oral arguments on Feb. 25.

These are just two of the important cases coming up at the Supreme Court. This spring, the justices also will hear cases involving partisan gerrymandering, deference to administrative agencies’ interpretation of their own regulations, and a challenge to the Trump administration’s inclusion of a citizenship question on the 2020 census form.