The Evolution of War Funding 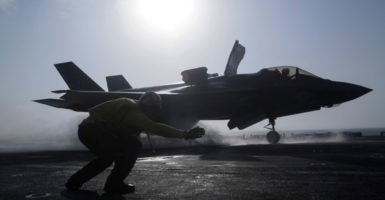 U.S. military funding has gone through a number of changes since the beginning of the republic. (Photo: United States Marine Corp/Handout/Getty Images)

Elias Gavilan is a member of The Heritage Foundation's Young Leaders Program.

In World War II, it was practically impossible to live a day in the United States without being directly affected by the war overseas.

Anyone who was not actively serving on the front lines was involved somehow in the war effort on the home front. Public involvement was not only evident, it was impossible to miss.

But today, the character of our wars has changed, and so has how we finance them.

According to Sarah Kreps, a professor of government at Cornell University, the connection between war efforts and our tax burden has largely been lost.

Kreps outlined this situation and its implications in her new book “Taxing Wars: The American Way of War Finance and the Decline of Democracy,” which she spoke about at The Heritage Foundation in late January.

Kreps described how the U.S. changed how it finances wars, from initial spikes in taxes and international borrowing in the early days of the republic, to war bonds during the world wars, to the current system’s overreliance on deficit spending.

Without cutting any government spending in the books, there are three main ways for the government to have more money at its disposal: taxation, printing currency, or borrowing. The preference should always be to live within the means of your budget, but that is typically far from the case.

The U.S. government has increasingly relied on borrowing, not just to conduct wars, but also to fund regular activities. The federal government is fast approaching trillion-dollar annual deficits, which broadly means that out of every dollar of service delivered by the government, the taxpayer only pays 75 cents.

The impulse to borrow is closely linked to what Kreps called the “ceiling effect.”

Kreps describes the ceiling effect as the point in which the public thinks that the taxes paid are enough to pay for both guns and butter, thus rejecting further taxation. This response makes politicians unwilling to ask for tax increases to fund wars.

It is in this context that Kreps’ idea of the “impossible trinity” enters the picture. She points out that politicians are operating under three separate vectors when they see the need to increase defense spending in times of war.

The first one is the need for extra defense resources. The second is the ceiling effect that removes tax increases from the equation. The third is the public’s desire to maintain the current welfare benefits.

Combined, these elements lead politicians to view borrowing as the path of least resistance.

This is how we as a country got into more than $21 trillion in debt and how we keep adding to it every day, according to Kreps, who criticized the lack of public accountability and the dangers of rising debt in conducting wars.

However, beyond financing wars, this mushrooming debt problem affects every government activity.

Kreps’ work highlights how government borrowing distorts the perception that citizens have on any government activity, not just war.

This discussion highlights how escalating debt is a challenge that needs to be addressed through serious reforms to how the government spends taxpayers’ dollars—not only looking at just dollars dedicated to overseas engagements, but also the welfare state.