How Many Times Trump’s Predecessors Declared a National Emergency 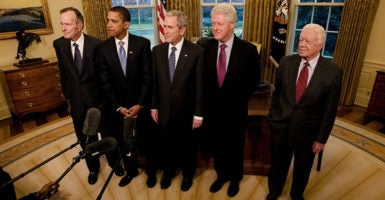 The push for a border barrier marks President Donald Trump’s fourth declaration of a national emergency—about a third as many as his three immediate predecessors in their two terms.

The number of declared emergencies puts Trump on a par with Presidents Ronald Reagan and George H.W. Bush.

President Gerald Ford, who signed the 1976 National Emergencies Act, did not declare an emergency under it. His successor, Jimmy Carter, made two such declarations during his single term—one of which is still in effect.

In all, 32 presidential declarations of a national emergency remain in effect, counting Trump’s action Friday, while 21 expired or were canceled.

The overwhelming majority of national emergencies involved either blocking access to U.S.-held assets for bad actors on the world stage or preventing financial transactions with those countries or with international entities and individuals.

Obama declared a national emergency 13 times and nine of those emergencies are still in effect, according to the Congressional Research Service.

The younger Bush declared a national emergency 14 times, and 10 are still in effect. Clinton made 14 declarations, six of which remain in effect.

Reagan, during two terms, and the elder Bush, during his single term, each declared four national emergencies. None is still in effect.

Although declaring a national emergency is nothing new, Trump’s action faces litigation in part because, unusually, it comes after Congress didn’t provide the amount of border wall funding he requested.

The president said Tuesday in the Oval Office that he isn’t too concerned. He noted that he rightly predicted a lawsuit would be filed in a district court under the jurisdiction of the liberal 9th U.S. Circuit Court of Appeals.

“I have the absolute right to call a national emergency,” Trump said, adding: “I actually think we’ll do very well in the 9th Circuit … because it is an open-and-closed case.”

Another report by the Congressional Research Service, from 2007, lays out the vast statutory powers a president has in a national emergency:

Under the powers delegated by such statutes, the President may seize property, organize and control the means of production, seize commodities, assign military forces abroad, institute martial law, seize and control all transportation and communication, regulate the operation of private enterprise, restrict travel, and, in a variety of ways, control the lives of United States citizens. Furthermore, Congress may modify, rescind, or render dormant such delegated emergency authority.

None of the presidents who declared an emergency under the 1976 law took such extreme measures as declaring martial law or controlling the means of production.

In December 2017, his 12th month in office, Trump blocked “property of persons involved in serious human rights abuse or corruption.”

Last September, the president declared an emergency “imposing certain sanctions in the event of foreign interference in a United States election.” This came after he alleged that China was trying to interfere with the 2018 midterm elections.

In November, Trump declared an emergency “blocking property of certain persons contributing to the situation in Nicaragua.” The move followed abuses by Daniel Ortega’s regime, according to the State Department, and targeted Ortega’s vice president and other close associates.

Most of the national emergencies declared by Obama are still in effect.

In 2010, Obama blocked transactions that would contribute to the conflict in Somalia. The next year, ahead of U.S. military intervention in Libya’s civil war, he blocked Libyan assets in the United States and prohibited certain transactions.

In 2011, Obama blocked access to assets by those threatening peace and stability in Yemen.

During his second term, in 2014, after Russia’s annexation of Crimea through military action, Obama blocked assets of “certain persons contributing to the situation in Ukraine.”

Later that year, he took similar actions by declaring separate emergencies regarding U.S.-held assets of persons contributing to conflicts in South Sudan and the Central African Republic.

In 2015, Obama declared emergencies to block assets of persons engaged in cyber crimes, and of those contributing to the conflict in Burundi.

No longer in effect is Obama’s emergency declaration from 2009 regarding the H1N1 virus and the swine flu, which he opted not to renew in 2010.

Obama also declared a national emergency to block access to enriched uranium for Russia, which his administration later dropped.

With five months in office, the younger Bush declared a national emergency on June 26, 2001, blocking access to assets for anyone threatening stabilization efforts in the Western Balkans.

Just more than a week later, Bush declared another emergency to block the assets of those who commit and threaten to commit or support terrorism.

In March 2003, Bush declared an emergency blocking property from anyone who would undermine democratic institutions in Zimbabwe.

By May, after the U.S.-led toppling of the Iraqi regime of Saddam Hussein, Bush declared an emergency protecting a development fund for Iraq and its anticipated new government.

The following year, Bush declared an emergency to prohibit the export of certain goods to Syria.

In 2006, Bush declared two separate emergencies to block assets of anyone who would undermine democracy in Belarus and in the Democratic Republic of Congo. The next year, he did the same regarding democratic institutions in Lebanon.

During his final year in office, Bush declared an emergency to continue existing restrictions on assets of North Korea’s communist government.

All of those emergencies remain in effect.

Among those actions revoked are prohibiting imports from Liberia and blocking property of of those contributing to the conflict in Côte d’Ivoire.

In his first term, Clinton declared emergencies regarding proliferation of weapons of mass destruction, blocking transactions with terrorist entities that disrupt the Middle East peace process, blocking the assets of narcotics traffickers, and regarding movement of vessels in Anchorage, Alaska. All these remain in place.

During his second term, Clinton blocked Sudanese government assets in the United States, an action that also remains in place.

Among the Clinton emergencies no longer in effect are prohibiting access to enriched uranium for Russia, forbidding investment in Burma, blocking the assets of Yugoslavia, and prohibiting transactions with the Taliban.

On Aug. 2, 1990, the elder Bush blocked Iraqi government assets in the United States from being accessed under dictator Saddam Hussein and prohibited any related financial transactions.

The action came months before Operation Desert Storm, in which the U.S. liberated Kuwait from an Iraqi invasion. The order was revoked in July 2004, after the second Iraq war and the toppling of Saddam.

In 1992, the elder Bush declared an emergency to block access to property in the U.S. owned by the governments of Yugoslavia, Serbia, and Montenegro.

Reagan saved the move for his second term, when he declared national emergencies to prohibit trade and other financial transactions with certain countries who were bad actors.

In 1985, Reagan declared emergencies to block trade with Nicaragua and South Africa, both revoked in the early 1990s under his successor, the elder Bush.

In 1986, Reagan blocked trade with Libya, an action reversed in 2004 under the younger Bush. In 1988, Reagan issued an order regarding Panama that was revoked in 1990 under the elder Bush.

Carter declared a national emergency on Nov. 14, 1979, to block the Iranian government from accessing its property inside the United States while government-backed radicals held U.S. Embassy personnel in Tehran as hostages.

Although the Obama administration dropped some of these sanctions under its 2015 nuclear deal with Iran, this national emergency remains in place. Carter’s executive order has been continued annually, most recently by Trump in November.

On April 17, 1980, Carter issued another executive order declaring a national emergency with more prohibitions on transactions with Iran. The Reagan administration overturned the order in 1981, after release of the hostages following Reagan’s inauguration.