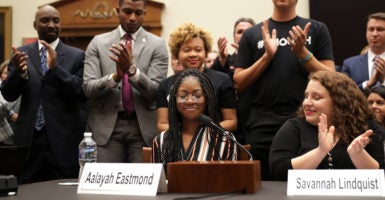 Audience members applaud Aalayah Eastmond, left, a survivor of the shooting at a high school in Parkland, Florida, during her emotional testimony Feb. 6 before the House Judiciary Committee. At right during the hearing on reducing so-called gun violence is Savannah Lindquist, a rape survivor who opposes further gun controls. (Photo: Chip Somodevilla/Getty Images)

One year ago Thursday, the horrific school shooting in Parkland, Florida, sparked an intense national debate over firearm-related violence.

As some pushed for broader restrictions on the Second Amendment rights of law-abiding citizens, The Heritage Foundation has undertaken the task of evaluating the complex, underlying realities of gun violence, including its relationship to untreated serious mental illness.

As part of a series of papers exploring this relationship, John Malcolm and I authored a Heritage legal memo, “The Consequences of Deinstitutionalizing the Severely Mentally Ill,” focusing on the mental health crisis in the United States and how states can combat that crisis to make communities safer.

Our paper begins by exploring several catalysts for the mass removal of the seriously mentally ill from inpatient facilities during the 1960s and 1970s, a process referred to as deinstitutionalization.

The first catalyst was a growing public awareness of the truly abysmal conditions in some large state psychiatric hospitals, which caused some to look for treatment options with more humane conditions.

Second, a general trend in the medical profession toward promotion of community-based treatment centers coincided with development of promising psychiatric medications that led many professionals to reconsider the possibility of successfully managing mental illness outside institutional settings.

Third, the establishment of Medicaid in 1965 de facto encouraged states to eliminate public psychiatric beds by prohibiting states from using federal money to pay for adult inpatient psychiatric care and promising additional money for each patient moved to outpatient care. It was financially beneficial for states to have as few public psychiatric beds as possible, and states began altering provision of mental health services to maximize their receipt of federal dollars.

Finally, beginning in the 1970s, the Supreme Court issued a series of opinions that made it harder for states to civilly commit even the most clearly mentally ill individuals, and also made it easier for those individuals to refuse treatment even when civilly committed.

As a result of these social, medical, and legal changes, the number of available public psychiatric beds in the U.S.  dropped by 95 percent between 1955 and 2016.

Although mass-scale deinstitutionalization began with the best of intentions, society simply did not have adequate community-based alternatives in place—nor have states since created the necessary alternatives.

The results have been devastating for both those with serious mental illness and communities that spent decades struggling to cope with a crisis they were not equipped to handle.

Several studies have found that having fewer psychiatric beds is associated with higher crime rates, including for violent crimes such as murder and assault. There are also strong indications that the dramatic rise in violent crime during the 1980s and 1990s was, in large part, an effect of deinstitutionalization and the massive influx of individuals with untreated mental illness back into their communities.

Meanwhile, the equally sudden decline of crime rates in the 1990s and 2000s can be explained in large part by the “reinstitutionalization” of these individuals into jails and prisons.

The burden of dealing with these individuals with untreated serious mental illness has fallen increasingly on law enforcement officers instead of on mental health professionals. This results not only in millions of lost man hours for law enforcement departments, but also places officers and mentally ill individuals at greater risk.

To our national shame, many mentally ill individuals are reinstitutionalized into jails and prisons, where they do not receive proper treatment. In fact, America’s jails and prisons have become the nation’s new psychiatric facilities: One recent survey found that between 37 percent and 44 percent of state and federal inmates had been told by a mental health practitioner that they suffered from a mental health disorder.

These mentally ill inmates cost considerably more to incarcerate, stay incarcerated for longer periods, and are victimized at far higher rates than are inmates who aren’t mentally ill.

Further, the few public psychiatric beds remaining often are filled up quickly as “forensic beds” for these mentally ill inmates, while nonviolent, noncriminal, but seriously mentally ill individuals are left to overcrowded emergency rooms. There, they spend days and sometimes weeks being stabilized, waiting for inpatient beds to open up and proper long-term treatment to begin.

This not only disproportionately diverts emergency room resources to crisis management for psychiatric patients, but helps exacerbate the mental health crisis by leaving many individuals in need of serious long-term treatment on waiting lists, allowing them to grow sicker—and in some cases, violent—before beds open up.

This can have catastrophic results, as shown by the case of David Logsdon in 2007. Logsdon suffered a mental health crisis but was released from a Missouri mental hospital after just six hours due to a bed shortage, and did not receive anymore mental health treatment. His condition deteriorated to the point that he killed a neighbor and used a stolen rifle to shoot people at random in a mall parking lot, killing two and injuring seven.

Recent studies have produced strong evidence that when states make it easier to order those with untreated mental illness to submit to outpatient or inpatient treatment, they tend to have lower murder rates as a result. In fact, over 25 percent of all state-to-state variations in murder rates could be explained solely by differences in civil commitment laws.

Strengthening the ability of law enforcement officers to involuntarily detain an individual suffering from a mental health crisis on an emergency basis realistically could have prevented a significant number of mass public killings.

Further, enforcement of current mental health mechanisms is often too lax and allows individuals who are known to be dangerous to themselves or others to legally access firearms and avoid necessary mental health treatment.

This, too, has been a primary factor in many otherwise preventable mass public shootings, including the events that occurred Feb. 14, 2018, at Marjory Stoneman Douglas High School in Parkland, Florida. There, law enforcement and school officials had ample evidence that the shooter was in desperate need of court-ordered mental health treatment, but never acted on that evidence in a meaningful way.

States also should reinvest in public psychiatric facilities, ensuring a sufficient number of beds of last resort to meet the needs of their citizens. The up-front costs of providing adequate numbers of public psychiatric beds may seem daunting, but they pale in comparison to the long-term costs of shifting the burden of housing and treatment to the criminal justice and emergency medical systems. The human and economic costs associated with untreated serious mental illness also are tremendous.

These steps—which focus on serious, underlying problems instead of on particular means of violence—are more much likely to prevent future atrocities than the broad imposition of gun control measures on the general public.

More importantly, these steps have the capacity to change the lives of those mentally ill Americans who have been left in the crosshairs of deinstitutionalization and whose illnesses can’t be treated with gun control.