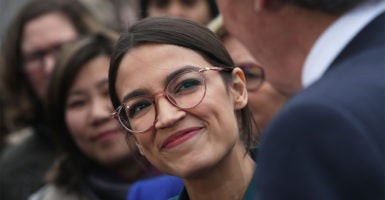 Rep. Alexandria Ocasio-Cortez's, D-N.Y., Green New Deal is just one example of how once-extreme ideas from the left are becoming more unfiltered. Pictured: Ocasio-Cortez during a news conference in front of the U.S. Capitol on Feb. 7. (Photo: Alex Wong/Getty Images)

Kermit the Frog was wrong. It is now easy to be “green.”

The evidence is the “Green New Deal,” which CNN describes as a ” … 10-year ‘economic mobilization’ that would phase out fossil fuel use and overhaul the nation’s infrastructure while building whole new layers into the existing social safety net.”

Conservatives mock her for proposing, among other things, the complete transformation of every building in the U.S. and trains that would span the oceans as airplanes are phased out. Ocasio-Cortez doesn’t appear to know how any of this will be paid for, but when one is liberal it doesn’t matter. It’s the thought that counts, not the outcome.

It is helpful to remember how what once seemed extreme has now become accepted.

Think of abortion, which most of the country opposed in the late 19th century. Now our elected officials advocate for it. New York Gov. Andrew Cuomo recently wrote a scathing op-ed in The New York Times supporting late-term abortions in his state.

Same-sex marriage, the outlawing of prayer and Bible reading in public schools, and ending the Pledge of Allegiance in some schools was once thought extreme and fantastical.

Now we have the extreme Green New Deal, which even addresses flatulent cows and the methane they emit. CNBC reports the plan “aimed to have the U.S. creating ‘net-zero’ greenhouse gases in 10 years,” lawmakers explaining: “We set a goal to get to net-zero, rather than zero emissions, in 10 years because we aren’t sure that we’ll be able to fully get rid of farting cows and airplanes that fast.”

Question. Since there are more humans than cows, shouldn’t the deal have included human flatulence, along with information on how they intend to control that?

Ocasio-Cortez was quick to backtrack.

“At the time this story was published, writes CNBC, the FAQ page with the phrase ‘farting cows’ appeared to have been removed from Ocasio-Cortez’s website. Fox News’ John Roberts reported that the language was tweaked to ’emissions from cows’ in an update, which also appears to have been deleted.”

In separate interviews, Ocasio-Cortez first admitted her proposal would require “massive government intervention,” but later reversed herself, claiming it is the right wing that is mischaracterizing her proposal about more government intrusion into our lives.

The left is completely transparent now. In the words of Barack Obama, they do plan to “fundamentally transform the United States of America.”

Millennials, especially, are fine with this because they have had such nonsense fed to them in public schools and by university professors. No evidence that contradicts their doctrines can persuade them. They accept what they have been told as a cult member accepts what their leader tells them.

Need proof? Read a report by the National Association of Scholars on the state of civics education in U.S. public schools. An analysis of the 525-page document on TheFederalist.com found that even in places where civics education remains, it is being:

The left used to mask their agenda for fear of backlash. Now they are open about their views. The response should go beyond ridicule. What we need is pushback that contains scientific, economic, and political arguments and supplants feelings with facts.

Want more proof that failed liberal policies never produce a change of direction, but a doubling down on discredited ideas? A task force created by Chicago Mayor Rahm Emanuel proposes giving some Chicago families $1,000 per month with no strings attached. The idea is to break the cycle of poverty, but that assumes recipients use taxpayer money wisely.

I’m sure a guaranteed check for doing nothing will be all the incentive some need to liberate themselves from an addiction to government. It has worked so well at the federal level, hasn’t it?

Several Democratic presidential candidates support the Green New Deal, though it reeks of communism. After the ridicule, opponents had better find a way to communicate the truth, or we risk becoming another Venezuela.