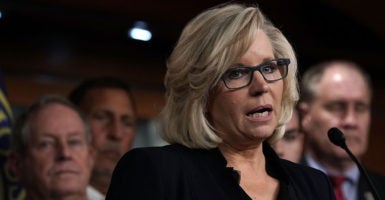 "We should certainly be able to come together across the aisle to protect babies,” Rep. Liz Cheney, R-Wyo., says. (Photo: Alex Wong/Getty Images)

“It should be an absolutely bipartisan issue that we protect babies,” Cheney said.

“When we look at what we saw happen in Virginia, happen in New York, those bills that would allow babies to be killed. And then you had the governor of Virginia describing how it could happen even after a baby was born. The fact that we’re even debating it is so appalling. It’s pure evil and we should certainly be able to come together across the aisle to protect babies.”

Cheney also commented on a Wednesday press conference she held where she said Democrats would turn maternity wards into killing fields.

“As the mother of five babies, you realize how precious every human life is. I was really struck by Governor Northam’s cold clinical description of killing a baby essentially after the baby’s born,” she said. “And I think that when you look at the language in these bills in New York and Virginia in particular, and you look at the incentives that are in those bills, you look at the regulations that are lifted, the extent to which abortion would be unregulated outside of hospitals, that benefits Planned Parenthood.”