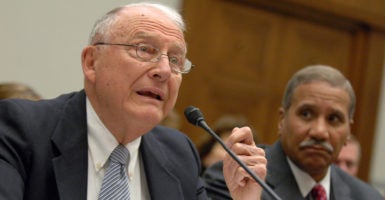 In this 2007 photo, former Secretary of the Army John Marsh, testifies at a subcommittee on national security and foreign affairs hearing to examine what actions have been taken to correct the care and living conditions of wounded soldiers at Walter Reed Army Medical Center. (Photo: Tom Williams/Roll Call/Getty Images)

America lost a patriot Monday with the death of John O. Marsh Jr.

Marsh, who died at 92, was the secretary of the Army for the first nine years of my 36-year Army career. Even as a junior officer, it was evident to me, way at the bottom of the organization, the respect and appreciation senior uniformed Army leaders carried for Marsh.

The spirit of public service was strong in Marsh, who was known for his gracious and folksy manner. He enlisted in the Army as a private in 1944, was then commissioned as a second lieutenant at age 19, and served with U.S. occupation forces in Germany for two years. Marsh went on to serve in both the Army Reserve and the National Guard, retiring in 1976 at the rank of lieutenant colonel.

Marsh started his political career as a Democratic congressman from Virginia, serving four terms from 1963 to 1971. By then, he was married to Glenn Ann Patterson, with whom he had three children. Their marriage lasted 65 years until Patterson died in 2015.

However, over the years, Marsh politically changed, “became increasingly ill at ease in a party that was tilting ever leftward,” per The Washington Post obituary, and declined to seek re-election in 1970. Marsh then went on to serve in a series of positions in the Nixon and Ford administrations, coming to be regarded as one of President Gerald Ford’s most effective and influential aides.

Marsh, who gradually began to “call himself a Republican,” as the Post notes, returned to private law practice until Ronald Reagan won the presidency in 1980. Soon after his inauguration, Reagan named Marsh secretary of the Army in January 1981.

As secretary, Marsh presided over the rebuilding of the Army, winning increases for the Army budget by 30 percent and throwing his support behind the enhancement of special operations forces in the wake of the 1979 “Desert One” fiasco, the failed rescue attempt of Americans held hostage in Iran.

Marsh was personally involved in persuading Congress to support the deployment of the Pershing II missile system to Germany. The Pershing II deployment is usually cited as the primary reason the Soviet Union agreed to the Intermediate-Range Nuclear Forces Treaty. It is no small exaggeration to say that because of Marsh’s efforts, the Army was able to defeat Saddam Hussein’s armed forces in 100 hours in 1991 in Desert Storm.

Eventually, Marsh would become the longest serving secretary of the Army in its nearly 244-year history, serving eight years and six months.

Our nation owes a debt to John O. Marsh Jr. for his service and the example he provides of public service.