To Anyone Who Thinks the Ralph Northam Controversy Is Insignificant 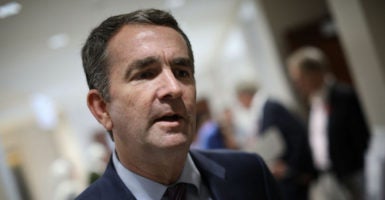 Gov. Ralph Northam, D-Va., received wide criticism for his comments on whether certain babies should be allowed to die after birth. (Photo: Win McNamee/Getty Images)

Controversy erupted this week after Virginia’s Democratic governor, Ralph Northam, not only defended a late-term abortion bill but also insinuated that babies could be left to die after birth.

Many Republicans, including President Donald Trump and Nebraska Sen. Ben Sasse, made public statements about the moral repugnance of Northam’s remarks.

Through a spokesperson, Northam, a former pediatric doctor, said his words were taken out of context by Republicans and that the idea of killing infants was “disgusting.”

Regardless of Northam’s intent, Americans should know that there is a great evil afoot in our nation, one that far predates Virginia’s bill or Northam’s comments. That great evil is the systematic undermining of human dignity.

From where do so many Americans find the ideological justification to take the lives of innocent human beings, whether born or unborn?

To answer that question, we must go back to Roe v. Wade. In perhaps the most perverse ruling in the Supreme Court’s history, the majority implicitly categorized the unborn baby in a mother’s womb as her “personalty” (a legal term referring to one’s private property) and effectively legalized abortion on the basis of a woman’s “right to privacy” in relation to the property in her womb.

In effect, Roe v. Wade asserts that the unborn child does not become a human being until it is born.

Justice John Paul Stevens, writing more than a decade later in support of Roe v. Wade, declared that even “the nine-month-gestated, fully sentient fetus on the eve of birth” is not yet a human being. He gives no explanation, but merely asserts—because there is no possible rationale. It is illogical to say a being’s location determines its nature.

Thus, only a few years after the civil rights movement had expanded protection of human dignity, seven lawyers chose to bypass the legislature to rule that an entire class of human beings—unborn babies—will not be guaranteed justice and equality.

The effects have been catastrophic, with Roe v. Wade functioning like an environmental disaster on the moral ecology of our nation.

>>> The Culture of Death Is Never Satisfied

The worst effects have been felt by the unborn beings who die violently in the womb during the act of abortion. Indeed, an unborn baby in a medical facility enjoys less legal protection in America than an endangered species of bird.

But social scientists, medical experts, legal experts, and philosophers have also shown that abortion on demand harms society in a more holistic manner.

For one, it harms women by encouraging male irresponsibility and sexually predatory behavior. It hurts men by giving them no legal say in the pending destruction of the baby they helped create. It hurts families and communities by teaching them that they can employ lethal violence in order to solve their problems. And it hurts law-governed democracy by denying justice and equality to an entire class of human beings—unborn babies.

Roe v. Wade has eroded the moral foundations of our nation and numbed our collective consciences.

It also set the stage for lethal violence to be used against infants after they are born. In fact, many of America’s most prominent ethicists now argue that it is morally plausible to take the life of a baby weeks after it has been born.

For example, Princeton University professor Peter Singer—often described as the most influential ethicist in the world—argues that it is permissible and sometimes even necessary to kill the innocent. He based this argument on a dismissal of Christian teaching about human dignity, opting instead for the view that human beings are mere animals.

Singer argues not only for abortion on demand, but also for legalizing infanticide and euthanasia.

There is a great evil at work in Singer’s argument, similar to the evil that produced the racial and ideological cleansings of the 20th century—yet somehow it is palatable to the privileged and enlightened thought leaders who hired him and who applaud his work.

>>> Down Syndrome in Iceland Is ‘Disappearing’ Because of Abortion

How should we respond, then, to abortion on demand and the chilling new movement to legalize infanticide?

First, we should show compassion for the very difficult situation many women find themselves in during unexpected pregnancies. We should provide financial support for adoption agencies, counseling services, pregnancy support services, and help equip churches who minister to women in crisis pregnancies.

But we must also look to persuade our fellow citizens as we seek both social renewal and legal reform, so that human babies will be protected, men will be held responsible, families will be kept together, and America’s claim to uphold “justice and equality” will apply to everyone in this land—born or unborn.

We should hope that recent controversies, such as the remarks made by Northam or New York’s radical abortion bill, will somehow become the “ground zero” from which many Americans become lifetime recruits for the pro-life cause. The America we seek should be one in which every child—unborn or born—is protected in law and welcomed in life.

Americans might recall years ago that the American Society for the Prevention of Cruelty to Animals launched a program to create “no kill” cities. In San Francisco, for example, they announced that “no adoptable animal with a treatable disease will be euthanized” and that they would “pay for medical care for an animal with a long-term health problem after it is adopted.”

Numerous other cities follow suit and became “no kill” cities.

Now if we could only expand that compassionate vision to include human babies.

Note: The sentence referring to numerous “no kill” cities has been altered since original publication.