I’m Asking ‘All 100 Senators to … Be Against Infanticide’: Sasse Reintroduces Abortion Survivors Act 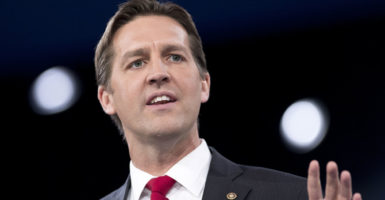 “This legislation is an opportunity for Congress to find consensus built on common sense, compassion, science, and a simple fact: every baby deserves a fighting chance at life. Providing care for newborns is more important than partisan political divides. Every baby has dignity—every baby deserves protection and love.”

Sasse will be asking the Senate to agree to pass the bill by unanimous consent Monday, National Review reports, adding that on the Senate floor, Sasse said, “On Monday, I’m going to ask all 100 senators to come to the floor and be against infanticide. This shouldn’t be complicated.”

On Wednesday, Virginia Gov. Ralph Northam, a Democrat and pediatric neurologist, defended the Virginia bill to legalize abortion right up to birth.

At a press conference Thursday addressing his controversial comments, Northam said, “We’re here to set the record straight. Virginia Democrats are on the side of ensuring women get the health care they need.”

“We’re talking about the most vulnerable among us, and we have a public official in America out there again and again defending a practice,” he added. “This is infanticide that we’re talking about.”

In an interview Thursday, Tran addressed her comments from Monday defending abortion up to birth.

According to a press release from Sasse’s office, the Born-Alive Abortion Survivors Protection Act “would protect newborns that survive abortions by requiring appropriate care and admission to a hospital.”

“The legislation requires that, when an abortion results in the live birth of an infant, health care practitioners must exercise the same degree of professional skill and care to protect the newborn as would be offered to any other child born alive at the same gestational age,” states Sasse’s office. “It also requires that the living child, after appropriate care has been given, be immediately transported and admitted to a hospital.”