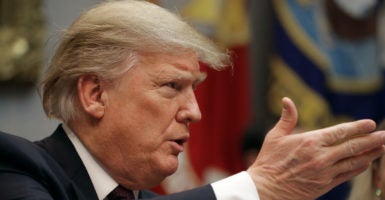 President Donald Trump says in an interview that religious bigotry has become a crisis in America. (Photo: Chip Somodevilla/Getty Images )

President Donald Trump said Wednesday that religious bigotry has become a crisis in the United States.

“I think it’s a crisis for our country,” Trump said in response to a question from The Daily Caller referencing attacks on religious freedom.

These include attacks by liberals on second lady Karen Pence for teaching art at a Christian school in Virginia, evidence of anti-Semitism within the leadership of the Women’s March, and virulent criticism of Covington Catholic High School students who encountered a Native American activist near the Lincoln Memorial in Washington.

Trump also referred to Democrats’ proposal to remove the phrase “so help me God” from the oath taken by witnesses before the House Committee on Natural Resources.

Trump also called out Virginia Gov. Ralph Northam, a Democrat and pediatric neurologist, for defending a bill to legalize abortion right up to birth, sponsored by state Delegate Kathy Tran, a Democrat.

“I watched that this morning. I watched the person testifying [Tran] and I felt it was terrible,” Trump said, adding that he thinks the pro-life movement will grow as a result of Democrats’ stand on the issue of life.

“I think this is going to lift up the whole pro-life movement like maybe it’s never been lifted before,” Trump said, adding of recent opinion polls:

And the pro-life movement is very much a 50-50, it’s a very 50-50 issue. Actually it’s gained a point or two over the years, but it’s been very much 49-51 and vice versa. I think this really will lift up the issue, because people have never thought of it in those terms. Because she [Tran] actually said, you know, [abortion should be permitted] the day of, virtually the day of birth.