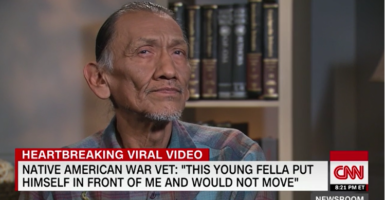 “These young men were beastly and these old black individuals was their prey, and I stood in between them and so they needed their pounds of flesh and they were looking at me for that,” Native American activist Nathan Phillips says. (Photo: Screenshot via CNN)

Native American activist Nathan Phillips has repeatedly misrepresented several facts about a viral incident between him and a group of boys from Kentucky’s Covington Catholic High School that took place after Friday’s March for Life.

Phillips has continued misrepresenting the incident, even as he has changed his version of events in the face of video debunking his earlier accounts.

Phillips originally told The Washington Post the students swarmed him while he was preparing to leave the Indigenous Peoples March scheduled for the same day. Phillips originally said one student, who has since identified himself as high school junior Nick Sandmann, blocked his path from leaving as he tried to do so.

Phillips’ original account was uncritically accepted by national media outlets and quickly exploded online, in combination with a selectively edited video that showed Phillips beating his drum in front of Sandmann and a group of boisterous high school boys.

Phillips told a second variation of his story to the Detroit Free Press. Phillips claimed he was playing the role of peacemaker by getting between the students and four “old black individuals,” whom he claimed the students were attacking.

“They were in the process of attacking these four black individuals,” Phillips told the Michigan paper. “I was there and I was witnessing all of this … As this kept on going on and escalating, it just got to a point where you do something or you walk away, you know? You see something that is wrong and you’re faced with that choice of right or wrong.”

“These young men were beastly and these old black individuals was their prey, and I stood in between them and so they needed their pounds of flesh and they were looking at me for that,” he added.

Extended video shows that account also isn’t accurate. The four individuals Phillips referenced were members of the Black Hebrew Israelites and they launched racist and anti-gay slurs at the high school students, not the other way around.

“The protesters said hateful things. They called us ‘racists,’ ‘bigots,’ ‘white crackers,’ ‘f——,’ and ‘incest kids.’ They also taunted an African-American student from my school by telling him that they would ‘harvest his organs,’” Sandmann, the high school junior, said in his statement.

Phillips repeatedly claimed in his interviews Sunday and Monday that some of the students he claimed had surrounded him had chanted “Build the wall.” None of the videos to emerge of the incident so far have shown any chants to that effect.

Rather than acknowledging the errors in his original stories, Phillips deflected by attacking Sandmann on Tuesday.

Phillips also suggested students should be expelled over the incident he misrepresented.

“At first, I wanted the teachers and chaperones to be reprimanded—some fired—for letting this happen. For the students, I was against any expulsions, but now I have to revisit that,” he said.