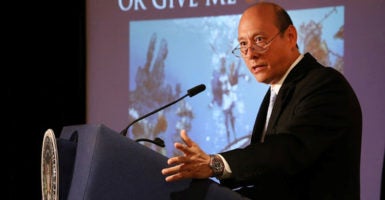 Michael Ramirez, editorial cartoonist for The Daily Signal, adds a presidential honor this week to his two Pulitzer Prizes and other awards.

Ramirez is one of three winners of  the Advancing American Democracy Award presented by the Indianapolis-based Benjamin Harrison Presidential Site, which is dedicated to preserving the legacy of the 23rd president, who served from 1889 to 1893.

“Editorial cartoons are a check to the erosion of our liberties and part of the first line of defense to the advance of the unrestrained power of government,” Ramirez said in an email to The Daily  Signal.

“I’m a big believer in editorial cartooning as serious journalism,” he said. “If you do the job correctly, you can have a profound effect on our political dialogue.”

The organization’s award goes to those whose work “advances the values of American democracy by encouraging citizen participation in self-government and in greater civic society,” according to a press release.

“Ramirez is a great exemplar of what the Benjamin Harrison Presidential Site seeks to recognize,” said Charles Hyde, president and CEO of the Benjamin Harrison Presidential Site. “He has used his pen point with great purpose to expertly probe our cultural and political psyche and expose the foibles, contradictions, and excesses of American civic society.”

Ramirez, 57, will accept the award Thursday at the organization’s annual fundraiser.

The two other honored cartoonists are Mike Luckovich of The Atlanta Journal-Constitution, also a Pulitzer winner, and Gary Varvel of The Indianapolis Star.

These three political cartoonists are at the pinnacle of their profession, providing an immense public service through their award-winning work. We envision this program as celebrating the remarkable role editorial cartoons have had in American civic and political life since our country’s founding.

Ramirez, who won the Pulitzer Prize in 1994 and 2008, also has received most of the other major awards in American journalism, including the 2005 National Journalism Award, the 2018 National Headliner Award, the 2008 Fischetti Award, and the H. L. Mencken Award.

The Daily Signal began to feature Ramirez’s cartoons in 2016.

He is a five-time winner in the editorial cartoon division of the National Cartoonists Society and has produced two books, “Everyone Has the Right to My Opinion” and “Give Me Liberty or Give Me Obamacare.”

Ramirez, a graduate of the University of California, Irvine previously was editorial cartoonist for the Los Angeles Times and Investor’s Business Daily, where he also was a senior editor.

He contributes weekly to The Daily Signal and The Weekly Standard. His work also appears daily in the Las Vegas Review-Journal.

“I am honored to receive the recognition and the Advancing American Democracy Award from the Benjamin Harrison Presidential Site along with two outstanding colleagues,  Gary Varvel and Mike Luckovich, who also happen to be my friends,” Ramirez told The Daily Signal.