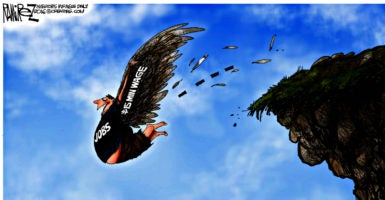 Michael Ramirez, a Pulitzer Prize-winning editorial cartoonist who for years has skewered the powerful and saluted everyday heroes, joins The Daily Signal this week.

“Michael Ramirez has a unique ability to communicate complex issues through his editorial cartoons.” —@RobertBluey

Ramirez will produce an exclusive cartoon each week for The Daily Signal with a conservative perspective on the hottest issues affecting the lives of Americans. His cartoons will be featured in The Daily Signal’s Saturday e-newsletter and on Facebook, Twitter, and Instagram. His first offering is here.

Ramirez, who lives in Southern California, became familiar to followers of politics and policy debates while working as a sharp-penned conservative editorial cartoonist for the Los Angeles Times and, more recently, Investor’s Business Daily.

“For years I’ve dreamed of adding Michael Ramirez to our roster of contributors,” Rob Bluey, editor-in-chief of The Daily Signal, said. “Michael has a unique ability to communicate complex issues and policy debates through his editorial cartoons. Having a two-time Pulitzer Prize winner join The Daily Signal is certainly an exciting development for our team.” “As a constitutional conservative, my editorial cartoons are a good fit for The Daily Signal,” Ramirez said in an email, adding:

We are in a industry where conservative thought and opinion are hugely outnumbered; at least, that seems to be the case in most newsrooms and presidential convention halls that I have visited. When I worked for The Los Angeles Times, it sometimes felt like I had to wear a Kevlar vest and a helmet just to walk through the newsroom, and use bomb-sniffing dogs to open my mail because I represented a vastly different point of view to my predecessor, Paul Conrad. I think the readers of The Daily Signal will find my editorial cartoons to be a good philosophical fit.

As a senior editor, Ramirez co-managed the editorial pages of the Los Angeles-based Investor’s Business Daily for 10 years, until the publication’s daily print edition converted to weekly in May.

In a letter announcing his departure, Ramirez wrote:

When I came on board at IBD, I promised [entrepreneur and founder] Bill O’Neil two things: I would elevate the visibility and influence of the IBD editorial page to the most influential political movers and shakers in the country and I would win him a Pulitzer Prize. I am proud to say that I accomplished both of those goals.

Ramirez won his first Pulitzer Prize for editorial cartooning in 1994 at The Commercial Appeal in Memphis, Tennessee, after which the Los Angeles Times hired him. He won the Pulitzer again in 2008 at Investor’s Business Daily. His cartoons have been syndicated internationally through Creators Syndicate since 2008 and appear in more than 400 newspapers and magazines. He is a regular contributor to The Weekly Standard.

Ramirez’s work also has been seen in The New York Times, USA Today, The Washington Post, the New York Post, Time magazine, National Review, and U.S. News and World Report, among many other venues.

His cartoons may be seen on his website and have been collected in two books, “Give Me Liberty or Give Me Obamacare” (Simon & Schuster Threshold Editions, 2015) and “Everyone Has the Right to My Opinion” (Wiley, 2008).

In his email to The Daily Signal, Ramirez said:

I believe in the purpose of editorial cartoons as a persuasive means to impact the political dialogue and to be the catalyst for thought. In this crazy and confusing political climate, I think people are looking for a conservative voice of reason. I look forward to filling that void. In our current state of politics, if we can actually restore some thought into the process, that would be an achievement in itself.

There is a trend in modern editorial cartooning and in politics, because of the fusion of news and entertainment, where they now substitute humorous anecdotes and jokes, the kind of ‘Tonight Show’ monologue, for serious political discussion. I am a serious journalist who uses images to convey serious and substantive messages. People are drawn to the visual medium and want real news. I hope that I can deliver substantive point of view and have an impact through The Daily Signal.

Ramirez drew for The Commercial Appeal from 1989 to 1997, then for the Los Angeles Times through 2005, when it cut the position. From 1989 to 2008, his cartoons were internationally syndicated by Copley News Service.

Acknowledging his cartoons were a bracing departure from the Times’ liberal editorial voice, Ramirez nevertheless credited the newspaper for “running cartoons that were so different than the philosophy of the editorial page.” Ramirez was born in Tokyo. His mother is Japanese, his Los Angeles-born father half Mexican and half Spanish and, eventually, a 23-year Army veteran. Ramirez said he spent “most of my formative years” in Southern California, but the family’s many moves also took him to France, Germany, Belgium, and “the People’s Republic of San Francisco.”

A 1984 graduate of University of California, Irvine, he first worked as an editorial cartoonist in California, beginning in 1982 at the Newport Ensign in Newport Beach and moving in 1989 to the Daily Sun Post in San Clemente.

According to one profile, Ramirez originally intended to study medicine at UC Irvine but got the journalism bug after “his first cartoon for the college newspaper, lampooning candidates for student office, had the student assembly demanding an apology.”

His other journalism honors include the National Journalism Award, the Fischetti Award, and the H.L. Mencken Award. He has won the National Cartoonist Society’s award for editorial cartooning five times.

He is the recipient of the UCI Medal from University of California, Irvine; was a 2004 Lincoln Fellow of the Claremont Institute; and is an honorary member of Pi Sigma Alpha, the National Political Science Honor Society.

To blow off steam in other ways, Ramirez told The Daily Signal, he surfs and is the keyboardist, rhythm guitarist, and lead singer in the seven-member DeLuz Band, which covers classic rock songs and “plays mostly charity gigs.”