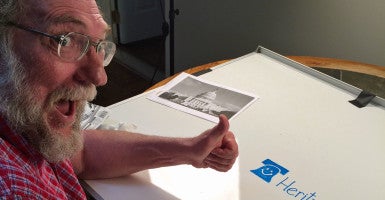 Daily Signal editorial cartoonist Glenn Foden, who delighted in puncturing the pretenses and policy missteps of politicians, died Sunday after suffering a brain aneurysm. He was 60.

Foden, a resident of Mount Airy, Md., had a gift for communicating conservative principles through his artwork. No matter the topic, he could deliver a humorous take on the most complex policy issues.

Genevieve Wood, senior contributor to The Daily Signal, who worked with Foden to settle on the topic of his weekly cartoon, recalled:

Every Wednesday morning I’d get an email from Glenn saying something like, ‘The ink is simmering, the coffee pot is on, what Washington debacle should we tackle this week?’ And so would begin our weekly back and forth of cartoon concepts to match up with a commentary on The Daily Signal.

Sometimes the first draft was the best; sometimes it took us three, four, or five revisions. It made no difference to Glenn—he was always committed to finding the right image and right angle to make the point and to make his audience chuckle.

Gray skies are gonna clear up. Put on a happy face. pic.twitter.com/h53w1wy3VQ

Foden, who studied political science at the University of Massachusetts, died while visiting family in his hometown of Chelmsford, Mass.

His career as an editorial cartoonist began in 1986, when he was hired as the staff cartoonist for the old Patuxent Publishing Co., publisher of local Maryland newspapers such as the Howard County Times, Towson Times, Catonsville Times, and Laurel Leader. The Baltimore Sun bought the company in 1997.

Foden met his wife, the former Teresa Franklin, when she was a reporter for the Catonsville Times, the Sun reported in an obituary.  He regularly won awards for his work from groups such as the Maryland-Delaware-D.C. Press Association. He became a freelancer about seven years ago.

Foden’s relationship with The Heritage Foundation dates to 2013, when he began producing cartoons for the Morning Bell daily e-newsletter as well as “whiteboard” videos such as this one on the Falkland Islands.

Patrick Frank, a former Heritage employee who films and edits online videos for The Daily Signal and other clients, recalled:

Glenn would leave around 5 a.m. to make a 1.5-hour or so trek from his place in Maryland to my place in Alexandria, where we’d spend all day filming a whiteboard video. … From storyboarding through filming, Glenn and I worked incredibly well together. [He] made sure each little detail of every scene was thoughtfully considered and delightfully executed.

We had a lot of time to kill working on these, and we’d have a blast talking about family, self-employment, ’70s rock bands, kind of anything but politics, to be honest. He epitomized the phrase “If you love what you do, you won’t work a day in your life” and was truly an inspiration to me. I’m heartbroken to think that we won’t have another filming day together. Amy Payne, who edited commentary for The Daily Signal’s predecessor, The Foundry policy blog, was instrumental in his becoming a regular here.

“Glenn was the type of person you usually only dream about working with,” Payne said, adding:

He was fun, easygoing, and had no ego involved. He was happy to bring others’ ideas to life. All I had to do was say, ‘What if we did something like this…,’ and he would whip up the cartoon version. No matter the time of day, he would come through for you—with a smile.

Foden became a weekly contributor to The Daily Signal, Heritage’s multimedia news organization, when it launched in June 2014.

He once said his first and best vote was for Ronald Reagan.

Foden is survived by his wife Teresa and their twin daughters, Emily and Hannah.

We’ve collected some of our favorite Foden cartoons for The Daily Signal as well as reflections and tributes on Twitter and his Facebook page from those who knew him.

I want to express my condolences to the family of Glenn Foden. Glenn passed away today. Glenn was a very conservative…

You and your insightful cartoons will be missed immensely, Glenn. You’re a huge loss to the world of art. God speed, Glenn Foden. May you rest in peace, my friend.

Glenn Foden and I were on opposite ends of the political spectrum, but our friendship endured because of the ability to…

Just a few of our favorites among Glenn Foden’s cartoons for The Daily Signal are below. To see more of his work for us, go here. Glenn Foden epitomized the adage “If you love what you do, you won’t work a day in your life,” says Patrick Frank, who collaborated with the cartoonist on many projects. (Photo: Patrick Frank/Patchbay Media)

This post has been modified to note Foden’s long association with the former Patuxent Publishing Co.