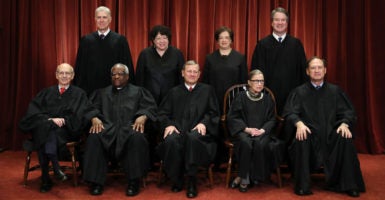 The Supreme Court announced Monday that it will hear a case challenging New York City’s prohibition on transporting licensed handguns within city limits to locations other than shooting ranges.

The petitioners are challenging city regulations that almost entirely forbid residents from removing lawfully owned handguns from their homes.

This is the first significant Second Amendment case the justices will hear since ruling that the Constitution protects an individual right to keep and bear arms, in District of Columbia v. Heller in 2008, and that this right applies against the states as well as the federal government, in McDonald v. Chicago in 2010.

In the intervening years, the lower courts have struggled with the contours of the Second Amendment as state and local governments have attempted to regulate away the newly protected right.

The Supreme Court’s landmark decisions in the Heller and McDonald cases raised many more questions to be explored in subsequent litigation:

What types of firearms, ammunition, and magazines may states prohibit, if any? Does the right to “bear” firearms extend beyond the home?

Can states require applicants for a concealed carry permit to show a “good cause” or “justifiable need”? What standard of review applies to regulations of firearms—rational basis, intermediate, or strict scrutiny?

Or, as then-D.C. Circuit Judge Brett Kavanaugh suggested in 2011, should courts throw out these balancing tests and “assess gun bans and regulations based on text, history, and tradition”?

Needless to say, it’s well past time for the Supreme Court to provide more guidance on these issues.

Thomas, joined by Gorsuch, wrote a dissent from the denial of review, noting that it was extremely improbable that “the Framers understood the Second Amendment to protect little more than carrying a gun from the bedroom to the kitchen.”

And last year, Thomas wrote another scathing dissent when the Supreme Court refused to hear Silvester v. Becerra, a case challenging California’s 10-day waiting period for firearms purchasers to take possession—even if their background check already had been completed. Thomas said he doubted that his colleagues would deny review if the delay was “a 10-day waiting period for abortions” or “even a 10-minute delay of a traffic stop,” since abortion and the Fourth Amendment are “favored rights.”

Under the challenged city regulations, any person wishing to legally possess a handgun in New York City, including residents with state-issued firearm licenses, must obtain a special “premises license” from the city.

These licenses permit a person to possess a handgun only in his or her home or to transport it to or from one of the city’s seven gun ranges. A person cannot even transport a handgun to a second home or more conveniently located gun ranges outside city limits. This is the case even if the handgun is unloaded and transported in a hard-sided and locked container, with any ammunition stored separately.

In essence, then, New York City has stripped residents of any right to remove their lawfully owned handguns from the home, for almost any reason, regardless of how safely the handgun is stored or whether it is to be used for a lawful purpose. In theory, residents cannot even take their handguns with them if they move to a new location, either inside or outside the city, as there is no lawful method of transporting the gun.

The city argues that the ban on transporting handguns limits the presence of handguns on city streets, and so promotes public safety. But this sort of reasoning would be hard-pressed to clear a rational-basis hurdle, much less survive intermediate or strict scrutiny.

Not only has the city routinely failed to provide empirical evidence to support its claim that banning the transportation of lawfully owned, unloaded handguns in locked containers meaningfully promotes public safety, but the restriction itself poses significant safety risks by mandating that residents leave their handguns behind in vacant homes.

Further, by prohibiting New York City residents from transporting handguns to more conveniently located shooting ranges outside of city limits, the city discourages lawful gun owners from honing their marksmanship and gun-handling abilities—skills that lower the risk of firearm mishaps.

This case gives the Supreme Court an opportunity to shed some much-needed clarity on its Second Amendment jurisprudence and ensure that the right is not treated like a second-class right.

Though the Second Amendment “might seem antiquated and superfluous” for “those of us who work in marbled halls, guarded constantly by a vigilant and dedicated police force,” Thomas observed in the Peruta case, the Supreme Court should not “stand by idly while a state denies its citizens that right, particularly when their very lives may depend on it.”