Grading Neil Gorsuch After 2 Months on the Court 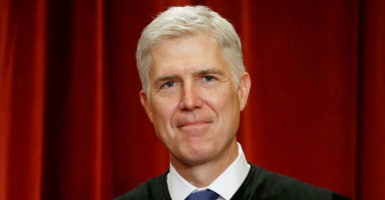 Justice Neil Gorsuch closed out his first two months on the Supreme Court this week, leaving conservatives cautiously optimistic about the future direction of the court.

Though he only participated in a limited number of cases this term, his commitment to textualism was evident in these early opinions. If this is a sign of what’s to come over the next several decades, then Gorsuch is the real deal.

Gorsuch’s opinion demonstrated his commitment to the law as it was written. He declined the petitioner’s invitation to change the clear text of a statute, writing: [I]t is never our job to rewrite a constitutionally valid statutory text under the banner of speculation about what Congress might have done.”

In his first dissent, Gorsuch once again kept a locked focus on the text of the statute in question.

In Perry v. Merit Systems Protection Board, a case that addressed which court has jurisdiction over mixed claims dismissed that were by the board, Gorsuch authored a dissent, joined by Justice Clarence Thomas, arguing that the petitioner asked the court to “tweak a congressional statute … so that it might (he says) work a bit better.”

Gorsuch responded, “If a statute needs repair, there’s a constitutionally prescribed way to do it. It’s called legislation.” He warned of the consequences of judges acting like legislators: “Judicial tinkering with legislation is sure only to invite trouble.”

Gorsuch also dissented in Pavan v. Smith, a case dealing with an Arkansas statute that allowed only the biological parents of a child to be listed on a birth certificate. The majority decided to summarily reverse the case (meaning they didn’t ask for briefs or hear oral arguments) in light of Obergefell v. Hodges, which requires states to recognize same-sex marriages.

But Gorsuch, joined by Justices Thomas and Samuel Alito, disagreed: “[N]othing in Obergefell indicates that a birth registration regime based on biology, one no doubt with many analogues across the country and throughout history, offends the Constitution.”

Maslenjak v. United States is a case involving the government stripping a naturalized citizen of her citizenship, following her conviction in a criminal case for making false statements during the naturalization process.

Gorsuch joined the majority, which reversed the conviction because of an erroneous jury instruction, but wrote separately, saying, “The Court holds that the plain text and structure of the statute before us require the government to prove causation as an element of conviction: The defendant’s illegal conduct must, in some manner, cause her naturalization.”

Gorsuch would have stopped there, but the majority, he noted, went on to “‘operational[ize]’ the statute’s causation requirement” by creating “two newly announced tests, the second with two more subparts, and a new affirmative defense—all while indicating that some of these new tests and defenses may apply only in some but not all cases.”

Gorsuch would have let the lower court take a first crack at applying the causation requirement.

He wrote a concurrence in Hicks v. United States, in which the court granted, vacated, and remanded back to the lower court the case of a man who wrongly received a 20-year mandatory minimum sentence.

Gorsuch explained that the court does not have an “obligation to rove about looking for errors to correct in every case in this large country.”

Here, however, “the lone peril [of not fixing the error] in the present case seems to me the possibility that we might permit the government to deny someone his liberty longer than the law permits only because we refuse to correct an obvious judicial error.”

In the court’s most high-profile case this term, Trinity Lutheran v. Comer, Gorsuch joined the 7-2 majority in finding that Missouri violated the Free Exercise Clause of the First Amendment by excluding a church from a grant program for scrap tires to resurface its preschool playground.

Gorsuch wrote a concurring opinion, joined by Thomas, in which he urged the court to do away with its distinction between religious status and religious use in reviewing cases of discrimination based on religion.

Gorsuch noted his skepticism of such a distinction: “I don’t see why it should matter whether we describe that benefit, say, as closed to Lutherans (status) or closed to people who do Lutheran things (use). It is free exercise either way.”

He also emphasized the principles at work in the case are not limited: “[T]he general principles here do not permit discrimination against religious exercise—whether on the playground or anywhere else.”

The court declined to hear Peruta v. California, which would have given the justices a chance to evaluate concealed carry restrictions. Thomas dissented from this decision, and Gorsuch joined him.

Thomas wrote that it is extremely improbable that “the Framers understood the Second Amendment to protect little more than carrying a gun from the bedroom to the kitchen.”

In Trump v. International Refugee Assistance Project, Gorsuch joined the per curiam opinion that allows much of the president’s executive order restricting travel from six terrorist safe havens to go into effect before the court rules on the merits of the case next term.

Gorsuch and Alito joined Thomas’ concurrence, which argued that the entire ban should have been permitted to take effect.

Gorsuch’s early opinions show a commitment to legal text and a careful, measured analysis. He has also shown a keen ability to make his writing accessible to even the most casual observer.

Gorsuch has so far planted himself squarely on the right, aligning with Thomas, the court’s most conservative member, in all but a single case.

The text of the law has consistently been his overriding consideration. He believes the judiciary is best when it is restrained and should refuse invitations to “update” laws.

We can only hope that Gorsuch continues this judicial philosophy throughout the course of his tenure. The court, and our country, will be much better for it.