Our Nation Is Not Yet Cleansed of Racism. Here’s What We Should Do. 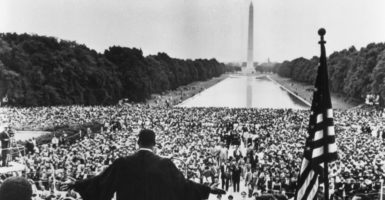 This 1957 photo shows the back view of American civil rights leader and Baptist minister Martin Luther King Jr., dressed in black robes and holding out his hands toward the thousands of people who have gathered to hear him speak near the Reflecting Pool in Washington, D.C., during the Prayer Pilgrimage. (Photo: Hulton Archive/Getty Images)

Martin Luther King Jr. Day offers Americans time to reflect and measure our progress toward building a civil society. An honest examination of history makes it clear that the law has not been able to cleanse our nation of racism.

The 15th Amendment has been in place for more than a century. The landmark 1964 Civil Rights Act has been on the books for over a half century.

Yet just this month, the U.S. House of Representatives felt compelled to pass a formal resolution that “once again rejects White nationalism and White supremacy as hateful expressions of intolerance that are contradictory to the values that define the people of the United States.”

While our founding document states that all men are created equal, clearly not all Americans have bought into that article of faith.

There is a limit to what laws can accomplish. While they instruct as to what we can and cannot do, laws are incapable of guiding our hearts to love our neighbor and our minds to process thoughtful and appropriate communication with our fellow man.

In December 1964, in accepting the Nobel Peace Prize, Dr. Martin Luther King Jr. called the Civil Rights Act the beginning of “a second emancipation.” Fifty-five years on, there’s still much emancipating to be done.

Throughout that period, conservative leaders have echoed Dr. King’s call to end racial insanity and the silent hate that continues to divide us. In response to incidents of bigotry and violence, President Ronald Reagan delivered a stern message to “those individuals who persist in such hateful behavior. “You are the ones who are out of step with our society,” he said. “You are the ones who willfully violate the meaning of the dream that is America. And this country, because of what it stands for, will not stand for your conduct.”

In accepting the presidential nomination at the 1996 Republican National Convention Bob Dole said, “If there is anyone who has mistakenly attached themselves to our party in the belief that we’re not open to citizens of every race and religion, then let me remind you, tonight this hall belongs to the party of Lincoln and the exits, which are clearly marked, are for you to walk out of as I stand this ground without compromise.”

Four years later, George W. Bush said, “For our nation, there is no denying the truth that slavery is a blight on our history, and that racism, despite all the progress, still exists today.” He could, and doubtless would, say the same today.

Speaking against racism is important, but policies that actually improve the quality of life for marginalized communities can make a tremendous difference, too.

Conservative policies typically aim to “lift all boats,” but they have proved remarkably effective in helping the disadvantaged. The 1996 welfare reforms, for example, helped millions escape the dependency trap and pull themselves out of poverty.

Some have argued that the right to a decent education is the most pressing civil rights issue of the day. Here, again, the conservative-led school choice movement is making a dramatic improvement in the lives—and the futures—of families who have been marginalized for far too long.

At the end of the day, however, laws and policies can’t cleanse America of racism because they can’t change hearts. What can? One possible answer: more basic human interaction between people of different races.

I so welcome initiatives like “Solution Sundays,” a program launched by Sens. James Lankford, R- Okla., and Tim Scott, R-S.C., in the aftermath of the violent protests that wracked East St. Louis, Baltimore, and other cities in 2015. At the time, activists and pundits seemed to be trying to force the nation to choose sides: either pro-police/anti-protester or pro-protester/anti-police.

Lankford and Scott felt there was a better way—to find common ground.

They discovered very few people they talked to had ever had someone of another race over for dinner. It was then, Scott told CNN, that he realized a huge part of the problem was the “personal disconnect” between races.  “It’s hard to hate what you know,” Scott noted.

“Solution Sundays” challenged fellow lawmakers—and their constituents—to “set aside lunch or dinner and just invite a family over of another race, and just sit down and have a meal together.”

Both senators report that this simple initiative has been tremendously successful in not just bringing together people of different races, but bringing them to a much greater understanding of each other. Scott even speaks of hearts being changed.

Making the effort to know those different from us is key to removing barriers between people. But talking about racism is not easy.

It is a topic fraught with emotion, and those emotions inevitably color the words we use, how we interpret them, and how we react to them. It’s tricky, because individuals interpret words according to their personal experiences and heritage. Often, this leaves people of different races “talking past each other”—or, worse, unintentionally “triggering” others—making little progress toward mutual understanding.

Thankfully, most Americans—on both the left and the right—dearly want to end the ugly racism that still divides our country. The vote on that House resolution condemning white supremacy was 424-1. But laws and resolutions can’t change hearts. Changing hearts requires a personal commitment. In addition, we must be intentional about wanting to strengthen our relationships across racial lines.