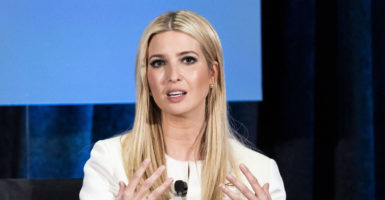 “This administration is continuing the fight to end modern slavery and using every tool at its disposal to achieve that critical goal," wrote Ivanka Trump in a recent op-ed. Pictured: Trump at the 2018 Kemp Leadership Award Dinner in Washington, D.C., Nov. 13. (Photo: Michael Brochstein/ZUMA Press/Newscom)

In a recent op-ed essay for The Washington Post, first daughter Ivanka Trump made a powerful case for the Trump administration’s ongoing effort to combat the evil of human trafficking.

“The United States is an extraordinarily generous nation, but [the Trump] administration will no longer use taxpayer dollars to support governments that consistently fail to address trafficking,” she wrote, concluding: “This administration is continuing the fight to end modern slavery and using every tool at its disposal to achieve that critical goal.”

As the administration has been working on this critical policy front, it is an opportune moment to highlight one of the best ways to eradicate the pernicious scourge of human trafficking; namely, by effectively encouraging countries to adopt policies that promote economic freedom.

Indeed, a close look at the relationship between human trafficking and economic repression reveals the critical role that advancing economic freedom can play in the fight against trafficking.

Tier 3 countries are those that have met neither the minimum standards,  nor made a significant effort to address human trafficking issues.

All of the 22 countries in Tier 3 in the 2018 trafficking report, including Burma, China, North Korea, Iran, and Venezuela, are economically “repressed” or “mostly unfree”—the lowest categories in The Heritage Foundation’s 2018 Index of Economic Freedom.

In addressing the critical issue of human trafficking, the Trump administration has taken strong measures to hold accountable those governments that have persistently failed to meet the minimum standards for combating human trafficking in their countries.

Specifically, the president’s recent directive will limit the number of national-interest waivers and restrict certain types of foreign assistance for the nearly two dozen governments of countries identified as Tier 3 by the Trafficking in Persons Report.

In sharp contrast, of the 39 countries designated Tier 1 in the trafficking report, all but three countries (Argentina and Guyana, “mostly unfree”; Aruba, not graded in the index) rank as “free” or “mostly free” in the index.

The implication is clear: Countries that promote economic freedom are more likely to be effective in combating human trafficking.

Improvements in the rule of law, the promotion of regulatory efficiency, and openness to global trade and investment, along with restraints on the size and reach of government, provide the best environment to inspire people to develop practical solutions to economic and social challenges confronting the world.

Human trafficking is too vital to get lost in the policy priority mix. Fortunately, the fight against human trafficking has strong bipartisan support, with four bipartisan bills in Congress the administration is working to get signed into law.

As the critical effort continues, advancing economic freedom should be an integral dimension of America’s leadership in leading global efforts to combat human trafficking.