Human Trafficking Is a $150B Industry, Experts Share How to Shut It Down 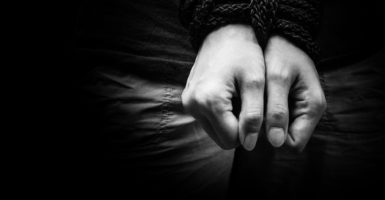 A panel of experts discussed how to strengthen the fight against human trafficking at The Heritage Foundation. (Photo: iStock Photos)

The federal government has dedicated much attention to address human trafficking since President Bill Clinton signed an anti-human trafficking bill in 2000, yet 18 years later, it continues to affect millions of people worldwide.

Human trafficking is the act of recruiting, harboring, transporting, providing, or obtaining a person for compelled labor or commercial sex acts through the use of force, fraud, or coercion, according to the U.S. Department of State.

The Trafficking Victims Protection Act was intended to combat human trafficking, an issue that is “one of the least understood phenomenons” and yields $150 billion for human traffickers every year, according to Heritage’s Olivia Enos, a policy analyst in the Asian Studies Center who specializes in human rights and transnational criminal issues.

The law also created a three-level system to rank countries based on their level of commitment to ending human trafficking.

Additionally, it punishes countries based on their level by imposing sanctions and withdrawing possible funding.

Where countries are placed on the list can be political, said Georgetown scholar Mark Lagon, who is an expert in human trafficking and migration.

Lagon said Malaysia and Cuba received “very questionable” rankings during the Obama administration, a better ranking than they deserved, according to Lagon.

The “irony,” Lagon said, is Malaysia “probably” got an easier ranking because the Obama administration wanted to keep it viable for the Trans-Pacific Partnership—the controversial trade deal between dozens of countries—which the Trump administration has “shredded.”

The experts agreed there are a few things that must be done in order to help fight human trafficking: raise awareness, stop the demand for human trafficking, fix the State Department’s tip reporting system, and enforce the law.

Many of these recommendations apply to countries across the globe, including the U.S., according to the experts on the panel.

People don’t think human trafficking can happen in their own backyard, yet it does, she said, pointing out how it occurs “right up the street” from Heritage’s District of Columbia offices and on the streets near Congress.

Other issues that the experts on the panel said must be addressed are the demand for human trafficking and the inability to prosecute websites that perpetuate that demand.

Countries like Finland block children from going on pornographic websites because there are studies that suggest the earlier a child is exposed to pornography, especially young girls, the more likely they are to be victims of human trafficking, said Allison Hollabaugh, an expert on human trafficking.

There are a number of bills that aim to strengthen the fight against human trafficking. One is called the Frederick Douglass Act, H.R. 2200, introduced by Rep. Christopher Smith, R-N.J.

The bill is named after Frederick Douglass because of his efforts to stop human trafficking even after the abolition of slavery in the U.S.

Smith has been a “champion” of fighting trafficking due to his role in reauthorizing the Trafficking Victims Protection Act, which needs reauthorization every three to four years, according to Lagon.

Lagon said the Trump administration is likely to focus on the trafficking of girls, due to Ivanka Trump’s influence in the administration.

“I think there’s a focus on exploitation of young women and girls. I would expect that kind of swing back,” Lagon said, referring to the Bush administration’s focus on fighting the trafficking of women for commercial sex.

The difference is, under former President Barack Obama, the focus was on labor trafficking, particularly child labor, according to Lagon.

“This a very bipartisan issue. There’s been a wonderful coalition which has survived increased partisanship and polarization in our political culture,” Lagon said.