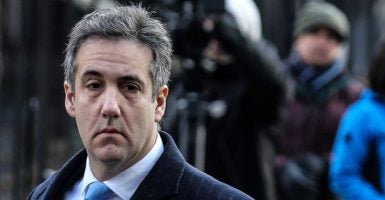 In recent days, Democrat politicians and the media have glommed onto Cohen, who has turned quickly into a harsh critic of President Donald Trump.

After a federal judge sentenced him to three years in prison Wednesday, Cohen was interviewed by ABC’s George Stephanopoulos, who was a press secretary and political adviser to President Bill Clinton.

Cohen blasted Trump and accused the president of intentional wrongdoing.

“I knew what I was doing was wrong,” Cohen said in the interview. “I stood up before the world and I accepted the responsibility for my actions.”

Cohen said that Trump “of course” knew it was wrong to authorize payments to two women who said they had sexual relationships with him—porn star Stormy Daniels and former Playboy model Karen McDougal.

“Instead of him taking responsibility for his actions, what does he do?” Cohen said. “He attacks my family.”

Trump said in a tweet that Cohen made the deal with prosecutors because his wife and father-in-law faced jail time.

Many pundits and other media types are now celebrating Cohen as a truth teller about Trump.

President Trump has been insulting Michael Cohen. And spreading falsehoods about their work together. And Cohen is not going to stay silent about it… https://t.co/AKHlWC39Mk

Rep. Ted Lieu: "Michael Cohen specifically says that Donald Trump directed him to make these campaign finance payments. That means we have a person sitting in the White House right now who is essentially an unindicted co-conspirator." https://t.co/6nB6mrCihM pic.twitter.com/IkT7RlLL0Z

Perhaps there should be a pause on suddenly taking Cohen at his word. It is worth noting that federal prosecutors very much cast doubt on the lawyer’s honesty and trustworthiness at his sentencing, which included scathing descriptions of his actions and character.

The prosecutors said Cohen was motivated to commit crimes by “personal greed” and that he “repeatedly used his power and influence for deceptive ends.”

These crimes, according to prosecutors, “were marked by a pattern of deception that permeated his public life (and was evidently hidden from the friends and family members who wrote on his behalf).”

Not only was Cohen knowingly committing crimes, but “he used sophisticated tactics to conceal his misconduct,” prosecutors said in court documents.

“Cohen told shifting and misleading stories about the nature of the payment [to Daniels],” as the news began to be widely reported, according to prosecutors.

Cohen also used his connection to Trump to manipulate others into believing he had access he didn’t have, they said:

Cohen successfully convinced numerous major corporations to retain him as a ‘consultant’ who could provide unique insights about and access to the new administration. Some of these corporations were then stuck making large up-front or periodic statements to Cohen, even though he provided little or no real services under these contracts.

The prosecutors recommended a long sentence for Cohen due to his “years-long pattern of deception,” which, given the “nature, multitude, and temporal span of criminal behavior,” revealed a man whose “outlook on life was often to cheat.”

Is this really the man who should now, suddenly, be embraced as a principled defender of the truth?

As The Heritage Foundation’s Hans von Spakovsky argued in a commentary, Cohen’s actions likely didn’t violate campaign finance laws (despite their unseemliness), but the federal investigation was revealing of his personality nonetheless.

Cohen’s pattern of deception suggests that his media rehabilitation tour should be taken with a healthy degree of skepticism.