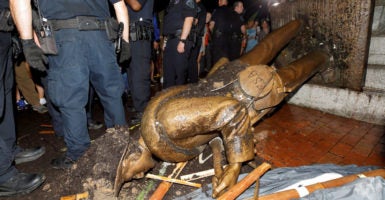 University of North Carolina police surround the toppled statue of a Confederate soldier nicknamed Silent Sam on the school's campus after a demonstration for its removal in Chapel Hill, North Carolina, Aug. 20, 2018. (Photo: Jonathan Drake/Reuters/ Newscom)

The University of North Carolina at Chapel Hill is considering a relocation for a Confederate statue that was toppled and vandalized to an indoor on-campus location.

Silent Sam could be moved into a new $5 million campus building if the proposal is approved by the board of governors, The Associated Press reported Monday. The board, which supervises the UNC system, is expected to look into the proposal Dec. 14.

The monument must stay on campus due to a 2015 state law even though Chancellor Carol Folt and several campus trustees said they preferred having Silent Sam off campus, according to The AP.

“It was very clear that public safety alone would make it impossible to return it to its base or any outdoor location on our campus,” Folt said, The AP reported.

Protesters reportedly tore down Silent Sam on Aug. 20 because they believed the statue represented the state’s slave-holding history. Blood and red paint were also reportedly thrown at the statue in a separate instance.

UNC Chapel Hill did not respond to The Daily Caller News Foundation’s request for comment in time for publication.