There Is No ‘Surge’ in Right-Wing Violence 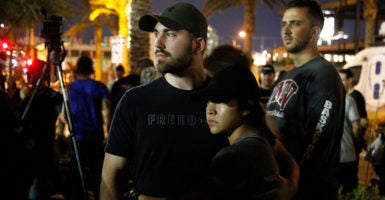 Pictured is the one-year anniversary ceremony of the Route 91 mass shooting at the "Healing Gardens" memorial. Although the Las Vegas shooter's motivations are still unknown, the Global Terrorism Database had no problem categorizing the murderer of 58 people as an "anti-government extremist." (Photo: JPA/AFF-USA.COM/MEGA/Newscom)

A Washington Post “analysis” of domestic terrorism argues that attacks from white supremacists and other “far-right attackers” have been on the rise since Barack Obama’s presidency and “surged since President Trump took office.”

It’s a familiar storyline meant to assure liberals that yes, Trump-motivated right-wing terrorists are running wild. There are, however, a few problems with this proposition.

For one thing, even if we accept the numbers the Post offers, the use of the word “surge”—meaning a sudden, powerful forward or upward movement—strains credibility. There’s no evidence of a “surge,” either in historical context or as a matter of ideological preference.

That is to say, we have good reason not to accept the numbers.

According to The Washington Post, which relies on Global Terrorism Database data, there were zero acts of right-wing terrorism in the entire nation in 2002. Since then, we have seen a “surge,” to 36 in a nation of 325-plus million people in 2017. Among those acts, there were 11 fatalities.

In other words, fewer homicides were committed by political terrorists of any stripe in the United States in 2017 than were committed by undocumented immigrants in the state of Texas alone—which, I am assured, is an incredibly low number that shouldn’t worry us very much.

If one of these “surges” is scaremongering, why not the other?

Then again, even if we use the criteria offered by the Global Terrorism Database, we need to be exceptionally generous to even get to 36 incidents of right-wing violence in 2017. (I could find only 32.)

For example, although the Post acknowledges that the Las Vegas shooter’s motivations are still unknown, the Global Terrorism Database had no problem categorizing the murderer of 58 people as an “anti-government extremist.” And it takes these sorts of assumptions to get in the vicinity of a “surge” in right-wing terrorism.

Of the 32 incidents I was able to find, 12 featured perpetrators who were merely “suspected” of being right-wing terrorists. Some of these incidents could have been the work of one person, as in the pellet gun shootings of Muslims in New York. In other incidents, we are asked to treat patently insane people as if they had coherent political agendas.

Still other events are even more opaque. In San Juan, Puerto Rico—apparently a hotbed of white supremacy—an incendiary device was thrown into a gay nightclub. No one was injured, thank goodness. Also, no one was caught, and no one claimed responsibility for the act. Yet the episode doesn’t even earn a “suspected” designation from the Global Terrorism Database.

To help bolster right-wing terrorist stats, for instance, we would have to perfunctorily include every anti-Semitic act. The Washington Post even mentions an Anti-Defamation League study showing “a 57 percent surge in anti-Semitic incidents in 2017.”

If anything, the Anti-Defamation League study should be cautionary, as it demonstrates how difficult it is to not only quantify these incidents but also categorize them ideologically. The Anti-Defamation League’s faulty data were self-reported, for instance, and most of the “surge” can be attributed to a single Jewish teen in Israel calling in a number of bomb threats to Jewish centers.

In the real world, a Jewish American is probably likelier to encounter anti-Semitism at a college campus than anywhere else.

Surely, both fall under the description of terror, which the Global Terrorism Database defines as “the threatened or actual use of illegal force and violence by a non-state actor seeking to attain a political, economic, religious or social goal through fear, coercion, or intimidation.”

As far as I can tell, only one of these genres actually makes the cut for the Global Terrorism Database .

This is what happens when reporters work backward from a predetermined premise.

You’ll notice, as well, that these analyses typically begin in 2002, seeing as the 2,977 Americans murdered on 9/11 are inconvenient to the white-supremacy-is-more-dangerous-than-radical-Islam narrative. The reason we don’t have a real-life “surge” of attacks by Islamic extremists since 2001, incidentally, is that the United States has spent billions yearly to stop it.

Of course, political violence isn’t the monopoly of any one group. Although there have been flare-ups of leftist violence in the 1900s and the 1960s and ’70s, for the most part, this kind of violence is still rare.

That could change. And none of this is to say horrible events aren’t happening. Nor is it to say that haters don’t exist.

But exaggerating the problem for political reasons doesn’t help anyone. Covering your partisan work with a bogus veneer of scientific analysis doesn’t make it any more useful.