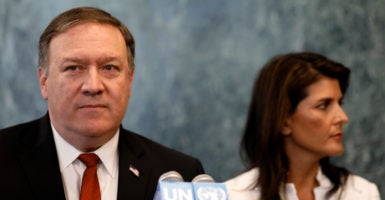 Pompeo’s and Haley’s statements rightly reaffirmed U.S. support for Ukraine in its war against a bellicose Russia.

The incident in question began early Sunday morning, when Russian border patrol boats intercepted two Ukrainian navy artillery ships and a tugboat near the Kerch Strait, which connects the Black and Azov seas.

In a statement released Monday, Pompeo appropriately classified Russia’s hostility near the Kerch Strait as “a dangerous escalation and a violation of international law.”

He continued by calling on Russia to return the Ukrainian vessels and detained crew members, “and to respect Ukraine’s sovereignty and territorial integrity within its internationally recognized borders, extending to its territorial waters.”

The secretary of state also called on both nations to “abide by their international obligations.” He asked for Ukrainian President Petro Poroshenko and Russian President Vladimir Putin to “engage directly to resolve the situation.”

>>> After 4.5 Years of a Stalemated War, Ukraine Braces for a Full-On Russian Invasion

The Kremlin’s claim that the Ukrainian vessels had illegally entered Russian territorial waters and were trying to spur conflict is not a legitimate justification. It’s important to remember that Russia is the belligerent here, and the United States is right to back Ukraine.

Russia invaded Ukraine in 2014, first illegally annexing Crimea and subsequently sparking conflict in the eastern Donbas region. And, although the Kerch Strait and Azov Sea are shared territorial waters under the 2003 Treaty on the Legal Status of the Sea of Azov and the Kerch Strait, Russia has repeatedly violated the treaty and international freedom of navigation laws.

In the Trump administration’s first public reaction to Sunday’s incident, Haley harshly criticized Russia on the floor of the United Nations for what she called an “arrogant act that the international community must condemn and will never accept.”

During an emergency U.N. Security Council meeting on Monday, Haley stood up to Putin and Russia, declaring, “This is no way for a law-abiding, civilized nation to act. Impeding Ukraine’s lawful transit through the Kerch Strait is a violation under international law.”

>>> On the Brink of Major War? Ukraine Grapples With Russian Attack

The United States has long aided Ukraine in its struggle against its larger, more aggressive neighbor.

Also, this past spring, the U.S. sold a host of Javelin anti-tank missiles to the Ukrainian military to aid in defense against Russian aggression in the eastern Donetsk and Luhansk regions.

More recently, in September, the U.S. signed off on providing two patrol boats to Ukraine within the next year.

The United States has also given Ukraine plenty of non-military support, including aid in the “economic, energy, humanitarian, democracy, good governance and health realms,” according to the U.S. Ukraine Foundation.

Both Pompeo’s and Haley’s statements this week have helped affirm that America’s commitment to its allies is unwavering and that support for Ukraine is appropriate and should continue unabated.