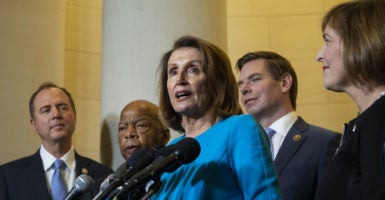 Nancy Pelosi is on her way again to becoming speaker of the House of Representatives when Democrats regain control in the new year, after being nominated Wednesday by a 203-32 vote.

House Democrats renominated Pelosi for the top spot, paving the way for a full House vote in January, despite the concerns of some that the party should choose a new leader rather than the veteran California Democrat.

“I will vote for Nancy Pelosi to be our next speaker because she has personally committed to me that she will reform the legislative process, make it more transparent, and allow the diverse ideas of all members to be considered,” Rep. Peter Welch, D-Vt., said in a statement issued before the vote.

“Specifically, she shares my view that committees must be empowered to do the hard and important work of writing legislation in the light of day and ideally in a bipartisan fashion,” Welch said.

Say hello to the next Speaker of the House, @NancyPelosi! pic.twitter.com/BvOaIxq3a7

Pelosi’s margin of victory Wednesday was a significant boost from Democrats’ vote of 134-63 in 2016 for her to be House minority leader.

Pelosi will need 218 votes to gain the speakership; Democrats will hold at least 233 seats in the House when the new Congress convenes in January.

On Nov. 19, a total of 16 House Democrats released a letter saying they would not vote for Pelosi.

Rep. Marcia Fudge, D-Ohio, toyed with the idea of opposing Pelosi, but announced Nov. 20 that she would support Pelosi, who created a committee chairmanship for Fudge.