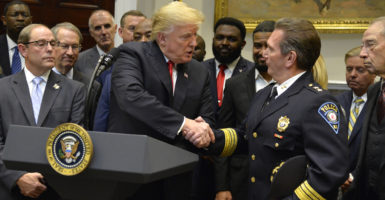 President Donald Trump thanks Paul Cell, vice president of the International Association of Police Chiefs, as he concludes remarks Wednesday on a prison reform bill at the White House. The House passed the legislation earlier this year; the lame-duck Senate has a small window to act on it before January, when the new Congress is sworn in. (Photo: Mike Theiler/UPI /Newscom)

The Trump administration anticipates finding some common ground with players in the National Football League in pushing a bipartisan prison reform bill through Congress before the end of the year, a senior White House official said.

Several conservative and liberal organizations are backing the bill, co-sponsored by Reps. Doug Collins, R-Ga., and Hakeem Jeffries, D-N.Y., which is geared to preparing inmates to re-enter society with job skills and reduce the rate of their return to prison.

The White House official didn’t identify the NFL players—some of whom have sniped with President Donald Trump over the issue of players’ kneeling in protest when the national anthem is played at games. However, the official, who spoke with reporters on condition of anonymity, anticipates certain players will publicly advocate the legislation.

In May, the House voted 360-59 to pass the bill, called the FIRST STEP Act (an acronym for Formerly Incarcerated Reenter Society Transformed Safely Transitioning Every Person Act).

The House likely will have to vote again on the version introduced in the Senate, where action was not yet scheduled.

At a White House event Wednesday, Trump delivered a speech supporting the bill.

“Redemption is at the heart of the American idea, and that’s what this is about,” Trump said.

No congressional Democrat attended the White House event, even though Trump stressed that the bill was bipartisan.

“The FIRST STEP Act will increase public safety, strengthen families, and give incarcerated people a chance to flourish after they’ve paid their debt to society,” James said, adding:

It is time to end the revolving door our federal prisons have become and put those who are willing to work for a second chance back on the path toward reaching their full potential.

These conservative, individualized, and data-driven reforms will give prisoners the education, skills, and rehabilitation they need to return to their communities and prosper. I applaud President Trump and members of Congress for coming together to recognize this opportunity.

The Trump administration hoped to move the bill through the Senate months ago, but Senate Majority Leader Mitch McConnell, R-Ky., suggested it was best to wait until after the midterm elections to whip votes, the senior White House official told reporters after the event.

McConnell’s office did not immediately respond to The Daily Signal’s request for comment for this story.

The Senate version of the legislation is co-sponsored by Sens. John Cornyn, R-Texas, and Sheldon Whitehouse, D-R.I.

The White House has had positive talks with Senate Minority Whip Richard Durbin, D-Ill., about the legislation, the official said.

Senate Judiciary Chairman Charles Grassley, R-Iowa, is a strong advocate of the bill.

The official told The Daily Signal that the White House hopes to see the bill passed in the lame-duck session of Congress because of the “urgency” of the issue, with 74 percent of inmates returning to prison for committing another crime after being released.

This will be the first of many steps in a criminal justice reform agenda, the official said, but declined to answer when asked whether Trump will make the issue a factor in his choice of the next attorney general.

The legislation would allow prisons to partner with nonprofits to provide education and training opportunities. The legislation also requires federal law enforcement to establish risk assessment guidelines for inmates, to reduce the number of re-offenders.

“The president is continuing his agenda of creating a stronger job market and safer communities with his support of the FIRST STEP Act,” John-Michael Seibler, a legal fellow at The Heritage Foundation, told The Daily Signal. “At the heart of the bill is that 95 percent of the people in prison are going to be released eventually in communities. This bill recognizes the high recidivism rate. … The goal is to get people ready to leave prison who are minimum or low risk.”

The bill doesn’t reduce sentences, but allows inmates who complete certain education and training programs to earn credits toward spending more of their sentence in supervision outside prison, in a halfway house or home confinement, in hopes they would get a job and more easily transition back into society.

The bill would not apply to serious and violent offenders.

Still, Sen. Tom Cotton, R-Ark., expressed concern over the legislation in a Wall Street Journal op-ed in August although he noted the worthy goal.

Cotton wrote that reducing sentences would be “a jailbreak that would endanger communities and undercut President Trump’s campaign promise to restore law and order,” adding:

The U.S. faces a drug epidemic today, exactly the wrong time to go soft on crime. …

Most criminals will commit more crimes after being released from prison, even with improved rehabilitation programs. The last thing Congress should do is shorten their sentences or allow them to ‘serve time’ in home confinement.

But Cotton did not outright oppose the legislation. The official said the White House has been in constant contact with Cotton, and believe his concerns can be addressed.

A subsequent op-ed in The Daily Signal by two former federal prosecutors disputed Cotton’s “soft on crime” characterization and argued that supervised home confinement is both cost-effective and has been shown to reduce recidivism.

The issue of prison reform gained considerable attention last month, when rap star Kanye West talked about it during a visit with Trump at the White House.