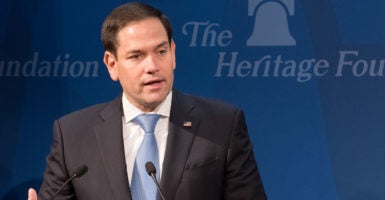 “America’s not an economy, it’s a nation of peoples and families and communities, and our economy works for the people, not the people for the economy,” Sen. Marco Rubio, R-Fla., said as keynote speaker of the Antipoverty Forum hosted by The Heritage Foundation on Thursday.

“The best antipoverty program is a job,” Rubio said, beginning his speech with a quote from former President Ronald Reagan. “Good jobs are jobs that connect the work [Americans] do, not just to a paycheck, but to the dignity that comes with a productive life.”

Instead of focusing on economics when discussing poverty, we should focus on those instances where “dignified work no longer allows working families the ability to provide that kind of stability in their homes or their communities,” Rubio said.

Rubio spoke of his own family’s rise from poverty to prosperity when they left communist Cuba, “trapped by the circumstances of their birth,” for capitalist America, where “through hard work and perseverance anyone … could get ahead.”

Rubio said this version of the American dream wasn’t about his family’s work ethic or the economy, but a defining feature of American life, “dignified work,” which he called a source of stability in a society.

Rubio suggested a number of possible policy proposals to reinvigorate the dignity of the millions of “missing men”—described by The Atlantic as prime-age men who are able-bodied but unemployed and not currently seeking employment—back into the labor force.

He suggested reforming the earned income tax credit to more clearly reward each hour of work, and antipoverty programs like the federal disability insurance entitlement and food stamps to mandate, rather than just encourage, work.

The Florida Republican pushed back against two proposals the left promotes as solutions to solve poverty, but undermine the dignity of work: a universal basic income and a federal jobs guarantee.

These approaches, in the senator’s view, only double down on the flaw of paying low-income workers to be “unproductive.”