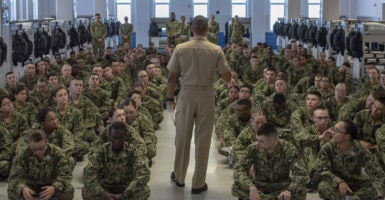 In Great Lakes, Illinois, Lt. Jamil Khan, one of 14 chaplains at Recruit Training Command, conducts suicide awareness training to recruits in their compartment at the USS Hopper recruit barracks. More than 30,000 recruits graduate annually from the Navy's only boot camp. (Photo: Us Navy/ZUMA Press/Newscom)

“The U.S. military could suffer unacceptably high casualties and loss of major capital assets in its next conflict. It might struggle to win, or perhaps lose, a war against China or Russia. The United States is particularly at risk of being overwhelmed should its military be forced to fight on two or more fronts simultaneously.” Those are the sobering words from a report released Wednesday by the bipartisan National Defense Strategy Commission. Air Force veteran and Heritage Foundation senior communications manager John Cooper joins us to discuss. Plus: Forget taking your kids to work—taking your parents to work is now what the cool kids are doing.