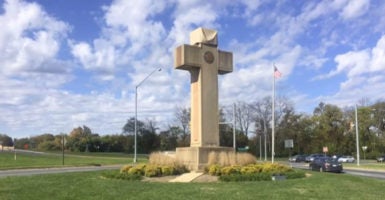 This World War I veterans' memorial is in Bladensburg, Maryland. (Photo: The Daily Signal)

The Supreme Court recently announced that it will hear an appeal for a case involving a memorial cross. This large cross stands in an open field in Bladensburg, Maryland, and commemorates the sacrifice of 49 local servicemen who gave their lives in World War I. We talk with Jeremy Dys of First Liberty, the organization that is defending the memorial against the American Humanist Association. Listen below, or read the transcript, slightly further down.

The following transcript has been edited for length and clarity. Jeremy Dys is the deputy general counsel for First Liberty, a law firm that defends religious freedom for all Americans, and is representing the American Legion in this veterans’ cross case.

Daniel Davis: Last year my colleague Jarrett and I went out to Bladensburg, Maryland, to see the memorial cross that your organization is now defending in court. And when we got there we saw a list of names on the monument, men who had given their lives in World War I, and it was sobering because we knew that if the court rules a certain way, it could soon be gone.

Can you give us some background here? Why is this memorial cross under threat?

In fact, the Gold Star mothers who designed this memorial back in 1919, a hundred years ago now, they chose the shape that mimicked the markers that sat over the top of the graves of many of their sons over in Europe. Most of the men who died in World War I were buried under a Celtic cross. Teddy Roosevelt’s son, for instance, famously was buried under a Celtic cross in the European battlefields.

And so they knew that Americans would forget the sacrifice of their sons if they didn’t have something to visually remind them of that. So they decided to design this monument in the design of a Celtic cross. And then they built it.

The American Legion jumped in to help out, and by 1925 that monument was erected right there, right at the terminus of the National Defense Highway, which is itself a World War I memorial. It runs between D.C. and Annapolis, Maryland.

And it’s been standing there, perfectly innocently keeping watch over the memory of these 49 men from Prince George’s County, Maryland, just as their mothers had wanted nearly a hundred years now until the Humanist Association decided that they’d had enough, and that that could no longer be tolerated. And so they managed to get the 4th Circuit to agree and now we’re at the Supreme Court of the United States.

Katrina Trinko: Yeah, I have to say, I have a family member who lives near that cross, and every time I pass it … you don’t really think a lot about World War I, and it is a very poignant reminder.

Jeremy, what are some of the possible implications of this case? Obviously we have religious-themed art throughout the United States and government buildings. We’ve talked some about Arlington National Cemetery. Could this case have wide-ranging implications?

Dys: Very much so. And to answer that, I have to remember Martha Redmond, whose son William is on the side of that memorial. When she was organizing support for the memorial back in 1919, she wrote to her senator and said, “The reason I’m so excited about this memorial is that I very much view this as my son’s gravestone.”

She couldn’t go to her son’s grave. It was over in France. You couldn’t just jump on a plane and go visit it at the time, so this was, in her mind, her son’s gravestone. And I think it’s appropriate that we think of it as that, as a gravestone for 49 men from Prince George’s County, Maryland.

So if that goes down, then it unleashes a bulldozer across the country. It’ll start there in Bladensburg, Maryland, and then it’ll go across the river to Arlington National Cemetery, where you’re going to knock the Argonne cross, the Canadian cross of sacrifice.

You may have to sandblast the side of the Tomb of Unknown Soldier that has religious language on it. Teddy and Bobby Kennedy’s gravestones are going to have to come down. They’re both buried under a cross in the grounds of Arlington. And you can keep on going across the country.

But this is why this case is so vitally important.

Not only do we want to avoid this—the erasure of the memory of the service and sacrifice of these 49 fallen servicemen from Prince George’s County, Maryland—we want to ensure that there’s a restoration of common sense here. Just because something is in the shape of what some people view as religious, doesn’t mean that it is somehow in violation of the Constitution if it shows up on public property.

That’s what I think Justice Clarence Thomas has in mind when he talks about how the Establishment Clause jurisprudence of our country is in “disarray.” And so I think this presents a great opportunity for the Supreme Court to provide clarification to that. Protecting this memorial in the first place, but providing guidance to the country as to what the Establishment Clause is meant to actually mean.

Davis: Yeah. I was actually just about to ask about that, because that’s such a key point. The other side is arguing with the Establishment Clause, basically having any religious symbolism or language on public property is basically equivalent to establishing a religion. And so you have to get rid of all of that. How do you respond to that assessment?

Dys: I think I’m as confused everybody is, right? Even those who did go to law school like me are confused. Which test are we supposed to apply now? You’ve got three, four different tests that might apply on Establishment Clause cases. The reasonable observer that is talked about is almost always offended at anything that is smacking of the religious.

And so it’s almost impossible for the Establishment Clause not to be violated by anything that bears on the religious and comes on public property. …

The bottom line is this. The Supreme Court has the opportunity to provide guidance on these issues. And more particularly, the Supreme Court is really the last hope for preserving the 90-year-old Bladensburg World War I veterans monument, and the memory of the 49 men from Prince George’s County that it represents.

Trinko: So of course the American Legion is involved in this. Have you, throughout First Liberty’s work on this case, encountered veterans or their families, and is this a case that you expect they’ll be following closely?

Dys: We are very privileged to represent the American Legion in this lawsuit. I should point out that, if you haven’t seen the memorial, what you need to know is that this concrete memorial right in the dead center of the cross has the emblem of the American Legion right there.

Don’t forget the American Legion was formed out of World War I, and so these guys coming back to the United States wanting to remember the men who had died, men like Howard Morrow who received the Distinguished Service Cross for his bravery overseas as a grenadier.

These were remarkable men, some of whom were not able to be … Well, I mean, you weren’t able to find enough of them to bury. These were heroes beyond what words are able to describe. And families felt the real loss of these things. But they would have been members of the Legion had they survived.

So I think the Legion feels a particular duty to remember the men that they served with or that served with their forebears, and preserve the freedom that you and I possess today. And so their duty is turn to them and say, “We’re going to watch over this memorial,” this gravestone, as Martha Redmond called it. And make sure that their memory is never forgotten come hell or high water, or the Supreme Court of the United States.

Davis: So Jeremy, what’s next in this case? And when are you all going to be in Washington, D.C., arguing the case?

Dys: I would guess probably in the early spring the Supreme Court will have arguments. They set aside an hour for the argument on this case. So maybe March or so we might be seeing arguments before the Supreme Court, and that would be followed, of course, by June when we would have an order coming from the court finally articulating whether or not this monument is going to have to be turned into an obelisk, or razed to the ground, or somehow removed. Now we’re not going to remove it. We’re not going to take that monument down.

It’s a very key decision that the Supreme Court has to make here. I think they should just simply honor the way that Gold Star mothers chose to remember the service and sacrifice of their sons who died defending our freedom. That’s the easiest solution here.

Trinko: You mentioned that there’s been several times that the courts have weighed in on this issue. Justice Kavanaugh, of course, will not have a history on the Supreme Court on this, but have any of the other justices been involved in rulings that maybe hint at how they would approach this?

Dys: Well, it’s a great question and one I’d have to go back and do my own research on … Justices Thomas and Ginsburg have had the opportunity to see a few of these cases.

But this is a pretty unique one. I mean, you’re looking at a 100-year-old monument. Don’t forget that most of these men died a hundred years ago last month, in October of 1918. So most of the men, in fact, the grand majority of the people who died in World War I from America, died in that offensive at the end of World War I in 1918.

And so this certainly is historic, and it presents a great opportunity for the court to remind everybody that we forget what we don’t see. And so we ought to honor the sacrifice that these men made.