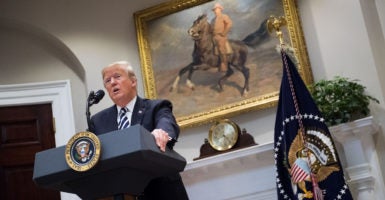 In the Roosevelt Room at the White House, President Donald Trump spoke out again Thursday against the Central American migrant caravan traveling north through Mexico and reiterated his intention to fortify the U.S.' southern border. (Photo: Kevin Dietsch/UPI/Newscom)

President Donald Trump said Thursday he is working on an executive order to deny automatic entry to the U.S. to illegal immigrants claiming asylum unless they go to a legal port of entry.

“My administration is finalizing a plan to end the rampant abuse of our asylum system, to halt the dangerous influx, and to establish this control over America’s sovereign borders,” Trump said.

“Under this plan, the illegal aliens will no longer get a free pass into our country by lodging meritless claims in seeking asylum,” he said. “Instead, migrants seeking asylum will have to present themselves lawfully at a port of entry.”

Trump said he will be releasing a “quite comprehensive” executive order next week.

“Those who choose to break our laws and enter illegally will no longer be able to use meritless claims to gain automatic admission into our country,” the president said. “We will hold them—for a long time, if necessary. The only long-term solution to the crisis, and the only way to ensure the endurance of our nation as a sovereign country, is for Congress to overcome open-borders obstruction.”

Currently, illegal immigrants who illegally cross the border can claim asylum, and the United States is legally obligated to grant them a hearing.

However, a single asylum case can take as long as three years to hear. Trump and other federal officials have said that illegal immigrants frequently don’t show up for those hearings, since they are already in the interior of the country.

“We will end catch and release. We are not releasing any longer,” he said.

Trump also spoke of the Central American caravan of migrants in Mexico making its way toward the United States’ southern border. At one point, the caravan reportedly numbered 10,000, but the crowd is said to have declined since then to fewer than 4,000.

“These illegal caravans will not be allowed into the United States, and they should turn back now, because they’re wasting their time,” the president said. “They should apply to come into our country. We want them to come legally into our country.”

Trump called the caravan an “invasion” that has already “overrun” the Mexican border, carrying out violent acts against Mexican police and soldiers. He has deployed 7,000 active-duty military personnel to assist Customs and Border Protection officials and has threatened to double that number.

He said the caravan was involved in a “break-in” to Mexico, one in which its police and military were attacked.

“Anybody throwing stones or rocks, like they did to the Mexican military and the Mexican police, where they badly hurt police and soldiers of Mexico, we will consider that a firearm, because there’s not much difference,” Trump said.