When Tragedy Came to Pittsburgh, First Responders Were There 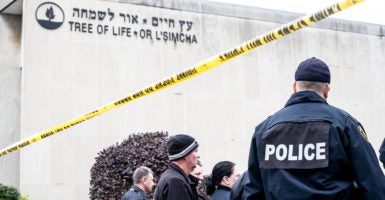 Police seen in front of the synagogue in the aftermath of the mass shooting at the Tree of Life synagogue, Oct. 27, 2018. (Photo: Aaron Jackendoff/Zuma Press/Newscom)

Last Saturday morning, my hometown of Pittsburgh experienced a horrendous tragedy when an evil individual fatally shot 11 people and wounded six others at the Tree of Life Congregation, a synagogue in the city’s Squirrel Hill neighborhood—the city’s largest Jewish community.

Since that awful morning, we have and continue to come together to remember the victims and their families and to pray for the Jewish people.

At this time, we are also remembering and praying for those who were on the front lines of Saturday’s shooting—namely, the city’s first responders and law enforcement officers.

These paramedics, firefighters, and police and SWAT officers, alongside their federal colleagues, put their lives on the line each day to keep Pittsburgh safe.

Saturday was no exception.

In many selfless acts of courage, first responders and law enforcement officers from all over the city and surrounding areas moved directly into harm’s way to save others and to bring an end to the attack—and they didn’t think twice about it.

Four of the six people who were wounded were police officers attempting to apprehend the gunman. Now, as they also move forward from this tragedy, these men and women need our thoughts and prayers for healing and for continued safety.

Some said that Saturday’s synagogue shooting was the worst crime scene they have ever encountered in their public safety careers. It’s a reminder to us all that these fearless individuals are also human.

While they will never gripe about what they see or what they do, the job can and does take an emotional toll on them, especially if one of their colleagues is injured or killed in the line of duty.

My Heritage Foundation colleague John Malcolm, in paying two compassionate tributes to our police (see here and here), has previously highlighted the risks and struggles these men and women face as they work day in and day out to keep our neighborhoods safe.

As Malcolm explained, “Many officers, of course, do not return to work the next day, but end up paying the ultimate sacrifice.” Others are left traumatized from the horrific incidents they have witnessed during their years of service.

Paramedics and firefighters face these risks and struggles, too. They, like police officers, “run toward danger while others run away, so that the rest of us might be safe from harm,” Malcolm wrote.

Two weeks ago, a man in Oregon set his own home on fire and ambushed firefighters as they approached the house to try to extinguish the blaze.

Between the crackling sound of the fire and their efforts to put it out, the firefighters didn’t even realize the man was shooting at them with a rifle. Thankfully, none of them were injured.

Yet, despite the risks and despite the struggles, our first responders and law enforcement officers wake up every day, put on their uniforms, and go to work to keep us safe.

They are all truly our heroes.

During this time, as we continue to come together for the victims and the families affected by the Pittsburgh shooting, let us also continue to remember and pray for the first responders and law enforcement officers of the city who bravely ran toward the deadly scene, not away from it.

To all of those men and women, thank you for your service, and know you are not alone as you heal from Saturday’s unthinkable act of evil.