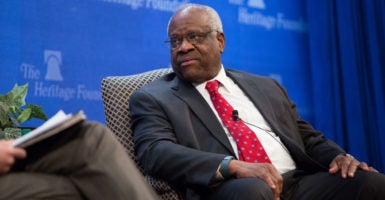 Lamar Bowman, a parent of two graduates of the Savannah College of Art and Design, published a petition to preserve Supreme Court Justice Clarence Thomas’ name on the building, saying, “I am proud to know that there is a building on that campus that recognizes one of the most accomplished African-Americans of our time.” (Photo: Willis Bretz for The Heritage Foundation)

An alumna of a Georgia college has canceled her petition demanding that the college remove Supreme Court Justice Clarence Thomas’ name from a campus building.

More than 2,400 people had signed an online petition calling on the Savannah College of Art and Design to rename its Clarence Thomas Center for Historic Preservation.

The petition webpage at Change.org was still up Wednesday afternoon, when The Daily Signal spoke with Sage Lucero, creator of the petition, in a telephone interview. But by Thursday evening, the petition had been taken down.

“I am disappointed to say that I am going to have to cancel my petition,” Lucero, a 2018 graduate of the Savannah College of Art and Design who listed herself as “S Anonymous” on the petition webpage, wrote in an Oct. 16 post that is no longer available. She added:

Threats have been made against me and I no longer feel safe moving forward with this.

Although the building’s name won’t change, I am satisfied with how many of you support women’s rights to feel safe and speak out.

No matter what our political backgrounds are, women’s rights are something we should all agree on. Equality of women will be a never ending fight. And I plan to keep supporting women’s rights in the best way I can moving forward. I hope you do too.

Lucero’s petition sparked a competing petition Oct. 17. Lamar Bowman, a native of Brooks, Georgia, and parent of two graduates of the Savannah College of Art and Design, or SCAD, published the petition to preserve Thomas’ name on the building.

“I am proud to know that there is a building on that campus that recognizes one of the most accomplished African-Americans of our time,” Bowman’s petition reads.

Lucero’s original petition, which she told The Daily Signal she started around Oct. 1, was titled “Take A Sexual Predator’s Name Off of SCAD’s Building.”

It called on the Savannah, Georgia, college and its president, Paula S. Wallace, to rename the building after Anita Hill, “a woman who stood up for herself despite being denied of true justice.”

Hill, now a professor at Brandeis University, accused Thomas of sexual harassment in 1991 and testified before the Senate Judiciary Committee in the days leading to Thomas’ confirmation to the Supreme Court.

Thomas denied Hill’s allegations and at one point referred to the hearings as “a high-tech lynching for uppity blacks.” Thomas, who was vehement he had not harassed Hill, also said during a hearing, “I would like to start by saying unequivocally, uncategorically, that I deny each and every single allegation against me today that suggested in any way that I had conversations of a sexual nature or about pornographic material with Anita Hill, that I ever attempted to date her, that I ever had any personal sexual interest in her, or that I in any way ever harassed her.”

Lucero, 22, said in her petition that she was unaware that a building on campus was named after Thomas until the Senate committee convened confirmation hearings on Brett Kavanaugh’s nomination to the Supreme Court.

Research psychologist Christine Blasey Ford accused Kavanaugh of sexually assaulting her when both were teens in the early 1980s.

Kavanaugh called Ford’s accusation, as well as other uncorroborated allegations from two other women, an “orchestrated political hit.”

Lucero, who studied advertising at the college and now works for an advertising company based in New York City, said in the petition that the college should remove Thomas’ name because he is a “sexual predator.”

Hill’s accusations, however, never resulted in criminal proceedings, much less a conviction. The Senate voted 52-48 to confirm Thomas.

Lucero told The Daily Signal that in light of the Kavanaugh hearings, she thought the fact that the building still bears Thomas’ name is particularly troubling.

“It’s really telling women they’re not welcome here … having someone’s name [on] that building who did those things to another woman is offensive and not welcoming to other women,” Lucero said.

In a February article for National Review’s “Bench Memos,” Carrie Severino of the Judicial Crisis Network made a forceful case for Thomas’ innocence, noting that, among other factors, “Not one co-worker of Hill’s testified in support of her allegations. Many of Thomas’ female employees, some of whom had been victims of sexual harassment themselves in other jobs, testified to his ‘scrupulous’ treatment of women and extraordinary sensitivity.”

And “Hill claimed not to have continued contacting Thomas after leaving [Equal Employment Opportunity Commission], but then later recanted when faced with telephone logs showing eleven such calls over eight years. Sen. [Arlen] Specter called this testimony ‘flat-out perjury.’”

Earlier this month, hundreds of alumni and faculty of St. Lawrence University in New York published two letters demanding that the small liberal arts college rescind an honorary degree it gave to Sen. Susan Collins in 2017 because of her vote to confirm Kavanaugh. The college has said it will not rescind Collins’ degree.

The building for the historic preservation center, first constructed in 1908, once was used as an orphanage and a convent for the Missionary Sisters of the Franciscan order. The college, which boasts around 45,000 enrolled students, purchased the building in 2003. It had been closed since 1969.

After the college finished renovating the building in early 2010, the school renamed it in Thomas’ honor because the Supreme Court justice, a Savannah area native, was an altar boy at the convent during his childhood.

According to Teen Vogue, the college responded to Lucero’s petition by saying school officials were “aware of the petition and have reached out to the sponsor.”

Lucero told The Daily Signal that college officials got in touch in early October.

“They just wanted to hear my outlook on the situation,” she said. “I realize it’s a big thing now for them to do, and there’s a lot of other factors that go into putting someone’s name on the building.”

“The university hasn’t talked to me since then,” she said.

A college spokesperson told Teen Vogue that the school received comments and feedback encouraging it to keep Thomas’ name on the building.

Nations in Action, a nonprofit that provides government agencies and faith-based groups with “targeted strategies and messaging” in local crises, assisted Bowman in setting up the petition and collecting signatures.

Maria Zack, president of the nonprofit, told The Daily Signal in a phone interview that the organization is “very much concerned [about the situation], as an organization which loves freedom, peace, justice, and fairness.”

“We are shocked by this attempt by a former student to remove Justice Thomas’ name from a campus building in a state like Georgia.”

“The accusation is not something we wanted to go unanswered,” she added.

Bowman, 69, told The Daily Signal in a phone interview that he views Thomas in a positive light.

“He really just seems like a man that’s come up from real humble beginnings and got himself to the point where he became a Supreme Court justice,” Bowman said. “It seems real impressive to me.”

Bowman, a retired engineering technician, said that while he doesn’t know whether Thomas sexually harassed Hill, he thinks the current #MeToo movement is setting a dangerous precedent, especially in light of the Kavanaugh hearings:

Generally, I think it’s a very dangerous thing if unsubstantiated threats can be used to bring someone down and make them unacceptable for a promotion or a job position. I don’t think it’s a place this country wants to go.

As of Wednesday, Bowman’s still-active petition had garnered over 20,000 supporters.

“I don’t think it’s pretty shocking that [the petition] has 20,000 signatures,” Lucero said. “[Bowman] had those signatures within two days.”

Lucero said her petition was about “standing behind Anita Hill, who is a black woman who had every right to be heard and she wasn’t.”

However, Lucero told The Daily Signal that she didn’t expect her petition to blow up beyond the Savannah community and become a national story. She also said she didn’t expect to receive threatening emails in response, and was hesitant to grant a phone interview.

“It’s very disturbing,” Lucero said of the situation. “It’s OK if you don’t agree with me, but you don’t have to threaten me because of it.”

“[These people are] threatening me and my livelihood, calling me a racist. It’s not true,” she said.

Bowman expressed disappointment over the fact that Lucero had received threats.

“It’s a real shame that it’s gotten to the point that a person can’t have an opinion on anything without getting attacked for it,” he said.

Bowman told The Daily Signal on Thursday that he hasn’t checked his computer or mailbox since last week, so he doesn’t know whether he also has been the target of threats.

The Savannah College of Art and Design apparently has not issued a public statement regarding changing the name of the building.

“We hope that the board of directors will do the right thing and keep Justice Thomas’ name on the building,” Zack of Nations in Action said.

The college did not respond to multiple emails and phone calls from The Daily Signal requesting comment.