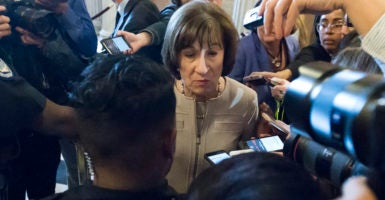 Hundreds of alumni and faculty are calling on a university to take back an honorary degree it gave to Sen. Susan Collins, R-Maine, in retaliation for her vote to confirm Brett Kavanaugh to the Supreme Court.

Graduates and professors of St. Lawrence University in New York published letters–addressed to the school’s president, board of trustees, and faculty–demanding that the university rescind the honorary doctorate of humane letters it gave Collins in the spring of 2017.

Ryan Deuel, director of media relations and strategic communications at the university, denied the claim in the letters that the school awarded Collins the honorary degree for political reasons.

“St. Lawrence University is nonpartisan and without political party affiliations. It does not take up political decisions on specific matters of the day,” Deuel said in a formal statement provided to The Daily Signal.

Collins graduated from St. Lawrence in 1975 with a bachelor’s degree in government. The Maine Republican also has two honorary degrees from the university, the other being a doctorate of law she received in 1998. The small liberal arts college counts 2,400 undergraduate students.

According to a report by CBS News, 1,300 alumni signed a letter Oct. 16 calling on the university to rescind the honorary degree in human letters “in support of truth and for all of the victims of sexual assault and violence, of which many of her fellow alumni and students have suffered.”

The letter argues that Collins does not deserve the degree because her vote to confirm Kavanaugh wasn’t based on “‘careful consideration of evidence,’ the ‘value [of] diversity and [recognition of] the inherent worth of every human being,’ and the installation of ‘knowledge into action to benefit our communities.’”

Those qualities did characterize her opposition in 2017 to Senate Republicans’ efforts to repeal  the Affordable Care Act, popularly known as Obamacare, her critics said.

Those campaigning against Collins apparently disregarded her detailed explanation, in a speech on the Senate floor, for her vote to confirm Kavanaugh.

The letter claims St. Lawrence awarded Collins the honorary degree because of her opposition to an Obamacare repeal.

Nearly 100 faculty signed a similar letter in support of the alumnis’ letter, its demands, and arguments.

The faculty letter makes the additional argument that rescinding Collins’ degree would be a “symbolic act” in the fight against campus “rape culture.” It alleges that Collins “contributed to increased politicization of the Supreme Court” by her vote to confirm Kavanaugh, and states that the faculty’s speaking out against such a distinguished alumna “contains risk” for them.

The faculty letter says that the signatories aren’t asking the university, located in Canton, New York, to revoke the honorary doctorate it gave Collins in 1998.

Collins’ office did not respond to emails from The Daily Signal requesting comment.

Deuel, the university’s spokesman, said the school awards honorary degrees based on recipients’ academic, artistic, or business accomplishments, contributions or service to various communities, or for a close relationship with the school that furthers its goals.

Deuel also said the university would not rescind the degree for political reasons.

“Throughout its long history, St. Lawrence University has never rescinded any earned or honorary degree, and it has no intention of doing so in this situation,” he said.

Deuel declined to provide comment to The Daily Signal beyond the formal statement.