In Light of the Caravan, Trump Is Right to Reassess US Aid to Central America 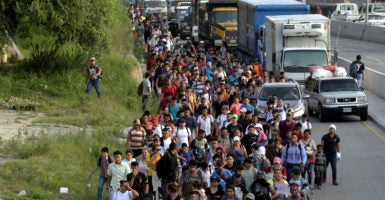 The caravan that originated in Honduras has grown to include over 7,000 migrants. (Photo: Jorge Cabrera/Reuters/Newscom)

Responding to scenes of thousands of would-be migrants from Central America trudging north in hopes of a better life in America, President Donald Trump has faulted the governments of the migrants’ home countries for not stopping those people from putting themselves and their children in jeopardy on the mean streets of southern Mexico.

Trump has threatened to cut their U.S. foreign aid programs.

Over the years, under both Republican and Democratic administrations, the United States has spent hundreds of millions of dollars on foreign-assistance programs in El Salvador, Guatemala, and Honduras—the three countries that make up the geographic “Northern Triangle” of Central America.

Trump’s focus on those foreign-aid programs presents a good opportunity for the administration and Congress to review the U.S. government’s entire foreign-assistance delivery mechanism.

In the process, dozens of programs in the three Northern Triangle countries could be reviewed. Not all of them are effective, and many are too small to make a long-term difference. Often, it’s difficult to measure their long-term impact.

More generally, as the Heritage report noted, the 25-plus large and small federal departments and agencies engaged in foreign aid that have proliferated over the decades—and remained in place, thanks to patrons in Congress and in Washington’s foreign-aid establishment—could and should be reviewed and consolidated. Programs should be assessed to see if they are still fit their purpose.

As Heritage recommended, the Trump administration should consider the merits of merging the USAID into the State Department and giving State control over more funds to be used specifically to achieve foreign-policy objectives.

For example, so-called “Economic Support Funds” could be targeted to emphasize the restoration of the rule of law in the Northern Triangle countries.

Improved law enforcement in Central America, where people are being terrorized by criminal gangs on a daily basis, could bolster economic freedom and create new opportunities for the people of the Northern Triangle countries.