Giving Away Money Won’t End Poverty, but It Will Destroy Something Special About America 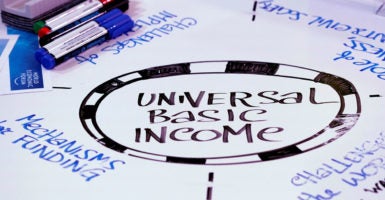 One of the left’s hot new policy ideas is simply to give money to everyone to end poverty.

And of course, California is leading the charge.

Harris’ plan, though vague on details, is quite similar to a policy idea that’s becoming increasingly popular.

Universal basic income, or UBI, has a wide variety of supporters from radical leftists to tech CEOs. It’s essentially a no-strings attached money giveaway to ensure that nobody falls below the poverty line.

Even a few conservative and libertarian-leaning thinkers, like Charles Murray, argue that the universal basic income could be an improvement over the current welfare system. Their reasoning is that it essentially does a better job of cutting out bureaucratic middlemen—though that rests on the unlikely assumption that all other welfare programs would get eliminated.

Proponents of UBI argue that it will stave off the effects of automation and provide an efficient way to prevent poverty in the turbulent, globalized economy of the future. The idea is that middle and working-class jobs will simply disappear, leaving wide swaths of society unable to make ends meet.

It has certainly been gaining steam as a serious policy proposal.

Stockton, California, is set to roll out a UBI program in November, though it will generally be limited to a few families. Other cities might experiment with it too. Chicago aims to be the largest city to try such a program.

Even former President Barack Obama jumped in on the idea and voiced support for a basic income in a July lecture in South Africa.

But the concept of the universal basic income isn’t a new one. It has been tried already and hasn’t exactly met the grand expectations of its advocates.

Finland launched a basic income program in 2017, which was set to run for two years. It gave 2,000 unemployed people a monthly income equivalent to $678 with no strings attached.

The program was ditched before it was ever completed.

One of the primary reasons Finland pulled the plug is that taxpayers simply became fed up with paying people not to work—especially with the looming threat of huge tax increases to enlarge the program.

As The New York Times noted: “Many people in Finland—and in other lands—chafe at the idea of handing out cash without requiring that people work.”

In addition, taxpayers balked at a 30 percent tax increase that was suggested to make the program universal.

A study by the Organisation for Economic Co-operation and Development suggested that the program would require a 30 percent tax increase to be made universal, and that it would actually raise Finland’s poverty rate from 11.4 percent to 14.1 percent.

Unsurprisingly, people love giving away money until they realize they are the ones footing the bill.

After just a year, the Finnish government put a halt to the program and added basic work requirements to unemployment benefits to encourage recipients to find a job.

But one op-ed in The New York Times denied that UBI was the problem, arguing instead that Finland simply failed to implement it correctly. The authors wrote that if the government had just expanded the program, it all would have succeeded.

This is a pretty common fallback for all of those who prefer big-government solutions to solve all of our problems.

Given the bad early warning signs from the program, it makes sense to pull the plug and not risk a catastrophic and incredibly costly failure.

The U.S. has also experimented with basic income policies. The federal government created a test program used across many states in the 1970s. The result was that they created a disincentive to work, and wages dropped.

A study of the results found: “For each $1,000 in added benefits, there was an average $660 reduction in earnings, meaning that $3,000 in government benefits was required for a net increase of $1,000 in family income.”

Currently, most basic income proposals are at the local level, but some argue that it would be a good idea on a national scale.

Of course, creating such a program would be astronomically expensive.

One estimate by the investment management firm, Bridgewater Associates, put the cost at $3.8 trillion per year if each citizen is to get a basic income of $12,000, according to the New York Post. The entire current federal budget is just over $4 trillion.

The largest problem with the basic income is ultimately not the cost, but its potential impact on American culture. What happens after we’ve had a generation, or multiple generations, being rewarded for not working?

Certainly, we’ve seen this problem with welfare in general, which is why we’ve seen a continual push for work requirements which have successfully moved able-bodied adults off the public dole and back into the workforce.

Giving a check to every American, regardless of need or situation, risks creating a kind of warehoused society whereby one class of people works while the other skates by mostly on public money, seeing no incentive to work and better their condition and status.

“Progress is about incentives,” Kessler wrote. “The reason UBI will fail is the cycle of dependency built into it. It is a gateway drug to collectivism. Turning the U.S. into Venezuela is a universally bad idea.”

If something like this were implemented on a national scale, it would pull us far away from the culture of hard work and the self-made man that has defined the best in American civilization.