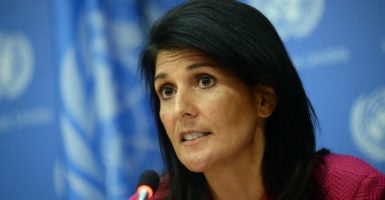 U.S. Ambassador to the United Nations Nikki Haley speaks at a press briefing at the United Nations headquarters in New York City on April 3, 2017. Less than a third of the votes taken by the U.N. General Assembly last year aligned with the U.S. position. (Photo: SMG/ZumaPress/Newscom)

The United Nations is not friendly ground for the United States. Last year, less than one-third of the votes taken in the U.N. General Assembly supported the U.S. position.

Think that’s because of the Trump administration’s “assault on multilateralism”? Think again. Since 1980, the General Assembly on average has backed the U.S. in only 35 percent of the votes taken.

Back in the Reagan administration, this lack of support for U.S. priorities led U.N. Ambassador Jeane Kirkpatrick to propose tying American aid to support U.S. policy positions in the U.N. Her argument went like this:

In my view, we cannot and should not maintain the compartmentalization that traditionally has separated our bilateral and multilateral diplomacy. We need to communicate to nations that their votes, their attitudes, and their actions inside the U.N. system inevitably must have consequences for their relations with the United States outside the U.N. system. We must communicate that it is not possible to denounce us on Monday, vote against us on important issues of principle on Tuesday and Wednesday, and pick up assurances of our support on Thursday and Friday.

Kirkpatrick’s 1983 testimony led Congress to require the State Department to submit an annual report to Congress on the voting practices of individual nations in the United Nations. They also required that the department take into account “a consistent pattern of opposition to the foreign policy of the United States” in allocating U.S. assistance.

Unfortunately, not even the Reagan administration implemented this requirement systematically. In the early 1990s, Congress rescinded the mandate to consider U.N. voting when determining aid allocation.

Therefore, it is hardly surprising that an analysis of aid allocation and U.N. voting over the past decade shows no significant relationship at all. Indeed, just as was the case in the early 1980s when Kirkpatrick first highlighted this issue to Congress, major recipients of U.S. economic assistance continue to be among the countries that support America the least.

No wonder that President Donald Trump and Nikki Haley, his U.N. ambassador for most of his term, have expressed frustration over countries that receive generous amounts of U.S. aid, only to vote against U.S. interests in Turtle Bay. Trump has now asked Congress to pass legislation to make sure that U.S. assistance “always serve American interests, and only go to America’s friends.”

Some have expressed concern that emphasizing support for U.S. priorities at the United Nations in aid allocation could undermine other development, humanitarian, or security priorities. However, the administration agrees that these factors should remain part of the discussion. As Haley made clear, “U.N. votes should never be the only factor in our foreign aid decisions. We have many interests that go beyond the U.N. But they should be one of the factors, and we are determined to start making that connection.”

She’s right. The deliberate decision not to weigh U.N. voting in aid allocation decisions must change. Currently, more than 400 legislative directives must be considered in aid allocation. These factors include the potential impact on the environment, labor standards, nutrition, disease, small businesses, human rights, drug trafficking, terrorism, and a host of other issues or subsets of those concerns. There are even a dozen directives involving what goes on at the United Nations — but voting patterns is not one of them.

The notion that opposition to U.S. interests in the United Nations should not be a factor — not even one of 400 factors considered in allocating U.S. assistance — is ludicrous. Every session, the U.N. considers resolutions that could damage U.S. interests and our diplomats there should have as many tools at their disposal as reasonable to influence other countries, including foreign aid.

While U.S. diplomats are skilled at engaging and reasoning with their counterparts, pressure from other countries — including an increasingly assertive China — is difficult to overcome. A financial incentive could help tip the balance and Congress should work with the administration to address this oversight.