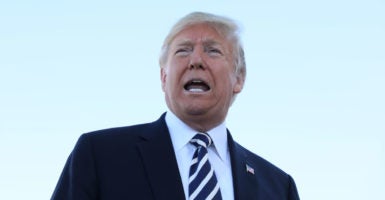 More Americans should care about nuclear-waste management than actually do. That’s because it’s an issue that has cost taxpayers more than $6 billion in court battles and is on track to cost tens of billions of dollars more.

But for many Nevadans and the wonky few outside of the Silver State who follow nuclear-waste politics, President Donald Trump’s remarks this past weekend caused a stir.

While in Nevada for a campaign rally, Trump expressed a rare opinion on plans for a long-term government nuclear-waste repository at Yucca Mountain, an issue he remained neutral on during his presidential campaign.

“I think you should do things where people want them to happen, so I would be very inclined to be against it,” Trump remarked. “We will be looking at it very seriously over the next few weeks, and I agree with the people of Nevada.”

According to the Nuclear Waste Policy Act, Congress directed the Department of Energy to begin collecting nuclear waste from defense and commercial nuclear power operations by 1998.

Congress chose Yucca Mountain as the site for a deep geologic repository, should the Nuclear Regulatory Commission grant the Energy Department a permit to build and run it.

The facility has long been controversial with Nevada’s elected officials. Then-Sen. Harry Reid, a Democrat, made a career of killing the Yucca Mountain project and found a powerful ally in the Obama administration.

The administration halted scientific and public review of the Energy Department’s license request to build the Yucca Mountain repository, a move contrary to the law as passed by Congress that landed the administration in court.

Consequently, it was a marked return to the law when the Trump administration included minimal funds to complete the license review in the president’s first proposed budget and consistently thereafter.

That makes Trump’s remarks about Yucca Mountain this past weekend surprising to some. Short of reading tea leaves, a few conclusions can be drawn.

Doing so gets all the facts on the table and is a good first step to solving a decades-long, festering problem. Finishing the review isn’t an irreversible decision to build the Yucca Mountain repository.

It merely brings all of the information to the table for Congress and others, among them Nevada and the nuclear industry, to make decisions about next steps.

Second, the Trump administration would be wise not to repeat the past. The administration of President Barack Obama acted unilaterally to shut down as much of Yucca Mountain as it could, and learned the hard way that that wasn’t legal.

According to the court, unless Congress directs otherwise or doesn’t provide the funds, the Obama administration was—and the Trump administration now is—required to continue the licensing review of a repository at Yucca Mountain.

Third, the burden ultimately falls on Congress to make a decision on a repository at Yucca Mountain. That is one reason why it’s important to let the science, public hearings, and contentions about the repository plans be adjudicated in the license review.

If after this, Congress rejects the building of a repository at Yucca Mountain, it needs to get to the hard work of legislating a new policy, rather than continuing the harmful limbo it’s chosen for the past eight years.

Finally, Trump makes a good point: The most promising opportunities come about through freedom, and there’s nothing more “consent-based” than the free market.

Government management of nuclear waste, as is the case today, has achieved neither public consent, nor permanent waste disposal.

That starts with placing responsibility for nuclear-waste management with the nuclear industry.