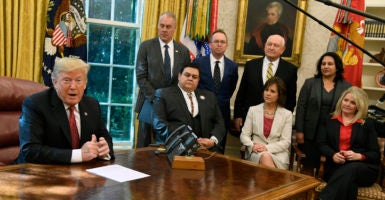 President Donald Trump’s deregulation agenda has meant $23 billion in savings for businesses across the country over the last year—leading to more economic growth, according to an administration report.

The president held an Oval Office event Wednesday titled “Cutting the Red Tape, Unleashing Economic Freedom,” which included business and government leaders across the country as well as details from the Office of Management and Budget and the Office of Information and Regulatory Affairs.

“We have set a record on killing regulations. No administration has knocked out as many as us, and we have a long way to go,” Trump said during the Oval Office event. “At the same time, we will have rules, regulations, and other standards which we need, we have to have. But we have knocked out tremendous numbers of unnecessary regulations.”

We’ve removed more regulations, and we will continue to get rid of regulations. I think within a period of about another year, we will have just about everything that we’ve wanted. And one of the reasons the economy is so strong is that we’re not hampered by the ridiculous regulations that we were getting rid of and are getting rid of.

Here are four major highlights of the report:

1. Trump vs. Obama on Costs to the Economy

During its first 21 months, President Barack Obama’s administration imposed, on net, more than $245 billion in regulatory costs, according to the report.

By contrast, the report said that in fiscal year 2018, which ended Sept. 30, the Trump administration has saved, on net, more than $23 billion in regulatory costs for the nation’s employers.

Since taking office in January 2017, the Trump administration’s deregulation efforts have saved the country $33 billion in regulatory compliance costs, according to the report.

Mulvaney added of the president:

He recognized that these regulations were hurting Americans; farmers, small businesses, and other job creators. This president was determined to correct the wrongs of the past so that Americans could once again be free to grow their businesses, provide for their families, and make their own decisions. Today’s report proves that President Trump is delivering on that promise.

Trump also stopped or delayed regulatory actions that were set in motion by the Obama administration.

The Trump administration—across all federal agencies—eliminated 12 outdated, unnecessary, or duplicative regulations for every one new regulation it adopted, according to the report.

The report said the administration eliminated 176 regulations in the last fiscal year, which ended Sept. 30. It added only 14 regulations.

During the last fiscal year, the administration also withdrew or delayed actions on 648 regulations that were in the works. Since the president took office in January 2017, a total of 2,253 pending regulatory actions were delayed or withdrawn.

“This is a fundamental change in direction. Agencies have actually reduced overall regulatory burdens,” Neomi Rao, director of the Office of Information and Regulatory Affairs, said in a prepared statement.

“This administration has focused on the rule of law, ensuring that agencies stay within their authority and regulate only when necessary,” Rao continued. “The reform agenda emphasizes individual freedom and unleashing the potential of American workers, innovators, and businesses. We aim for common-sense regulatory policy that benefits all Americans.”

The Labor Department issued a rule to allow association health plans, enabling small businesses and organizations to join together to offer insurance plans.

The associations can stretch across states, thus allowing employees of these businesses along with sole proprietors to buy across state lines.

The Department of Health and Human Services eliminated some provider paperwork rules for skilled nursing facilities, inpatient hospitals, and home health providers. HHS projects that rolling back these regulations will save $8.2 billion in regulatory costs.

The Department of Veterans Affairs expanded the use of telecommunications access for veterans. The administration projects that expanding telehealth could save the VA and veterans as much as $400 million.

The agency opened large areas off the coast of New England states to be open to commercial sea scallop harvesting. The report estimates this will have a net economic benefit of $654 million.

NOAA also increased flexibility for bluefin tuna fisherman and revised regulations for shark fishing. The agency also expanded the Fisheries Finance Program to “make it easier for the next generation of fishermen to purchase fishing rights and start a business.”