When I First Realized America Is Exceptional 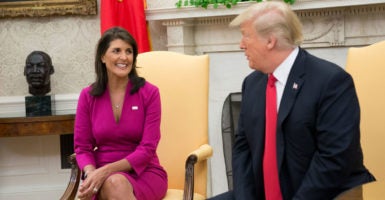 The parents of the present U.S. ambassador to the United Nations, Nikki Haley, are Sikhs who immigrated to America from India. Few Americans know this, and those who know don't care. (Photo: Pappis Jean Pierre POLARIS/SIPA/Newscom)

I moved to California from New York City in 1976. The founder of what was then America’s largest Jewish retreat center, the Brandeis Institute (not affiliated with the university), Dr. Shlomo Bardin, asked me to work as his assistant. He was 75 years old; I was 25.

One weekend the next year, he announced to the membership he wanted me to succeed him. To everyone’s shock, he died that very week. It was then renamed the Brandeis-Bardin Institute.

The institute was located in Simi Valley, California, then more a small town than even a small city. It had all of two restaurants. I lived there for three years and joined the Simi Valley Rotary Club.

To the best of my memory, I was the only Jew in that Rotary chapter. What struck me was that my being a Jew meant essentially nothing to the other members. No one cared. Not even a little.

If you are an American, my reaction makes little sense. You are wondering why it struck me that my being a Jew meant nothing to the entire membership.

The reason was I knew Jewish history. Prior to moving to California, I taught Jewish history at Brooklyn College. Nowhere in the Jews’ 3,000 years as a people living in non-Jewish societies did being a Jew ever mean nothing to the non-Jews among whom they lived.

The Jews of France were known as Jews, as were the Jews of England, Brazil, and everywhere else. If I were in a Rotary Club in a small French city, especially if I were the only Jew in the club, the other members would know me as “Denis le Juif,” Dennis the Jew. That did not mean the other members were anti-Semites, only that in Europe, as everywhere else, if you weren’t a member of the majority group, you were known as a person with that other identity.

If you were to mention to any of the members of the Simi Valley Rotary Club in 1976 that this guy Prager was a Jew, their reaction would likely have been “So what?”

And it wasn’t as if my identity was hidden. On the contrary, the reason I was admitted to the club was that I was the head of something—a Jewish educational center. And for the record, that would have been the Rotarians’ reaction if I were an Arab, a Latino, or a black.

To this day, a German whose grandparents immigrated to Germany from Turkey is likely to be regarded as a Turk, even if he speaks no Turkish and speaks German exactly as other Germans do. And this monumental difference goes in both directions. This third-generation Turk in Germany is not likely to regard himself as a German.

But a Turk who immigrates to America is regarded as American the moment he becomes an American citizen (if not sooner)—even if he has a Turkish name and speaks halting, accented English. If he wants to identify as American, he’s an American.

Only in America have people of every background come to be regarded as fully members of the majority group. The parents of the present U.S. ambassador to the United Nations, Nikki Haley, are Sikhs who immigrated to America from India. Few Americans know this, and those who know don’t care. As far as most of us are concerned, Haley might as well be a member of the Daughters of the American Revolution.

Of course, Americans did not always live up to American ideals—their attitudes toward black Americans being the most obvious example. But America evolved into the least racist and least xenophobic society in human history—the society that most successfully assimilates others as full members.

Today, however, there are two threats to this exceptional American achievement.

One threat comes from the left, which does not want minorities or immigrants to assimilate but to retain their minority or immigrant identity as their primary identity. If a black American says, “I am an American who happens to be black,” he is vilified by the black and white left as a “traitor to his race” and an “Uncle Tom.” The left regards efforts to assimilate all Americans into one American identity—such as declaring (not even legislating) English as the official language of the United States—as a form of “white supremacy.”

The other threat comes from those immigrants who do not come to America to become American but to use America for its financial, medical, and educational benefits while remaining attached to their own culture.

When politicians and commentators on the left analyze the 2016 presidential election, they invariably ascribe the Trump vote to lower-class angry whites. But this upper-middle-class Jew voted for President Donald Trump (and would have voted for any Republican) not out of anger but out of love—for the exceptional country he fell in love with at the Simi Valley Rotary in 1976.