The Left Lost on Kavanaugh, So Now They Want to Abolish the Senate 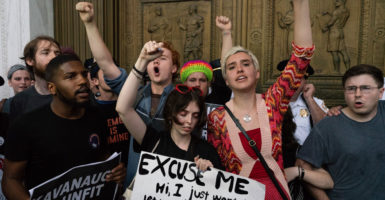 Some progressives are calling for extreme measures after Justice Brett Kavanaugh was confirmed to the Supreme Court. (Photo: Ken Cedeno/UPI/Newscom)

After every political defeat, the left seems to blame anyone but themselves. Instead, they lash out at our political institutions.

Whether it’s seeking to pack the Supreme Court, removing President Donald Trump from office by stretching the intent of the 25th Amendment, or calling on low-level bureaucrats to “resist” the president’s policies, the left has had no shortage of terrible ideas in the past year alone.

Given the level of rage following Brett Kavanaugh’s confirmation to the Supreme Court, it was no surprise that the left took aim at the fundamental framework of our constitutional system.

Many progressives are now blaming the Electoral College and the Senate for defeat because they aren’t democratic enough. Worse, they’ve claimed that these institutions were simply designed to protect slavery, which is an incorrect and absurd distortion of the truth.

Ken Norton, a Google executive, tweeted out that we should abolish the Senate after it became clear that Kavanaugh would be confirmed.

“Senators representing less than half the U.S. are about to confirm a nominee opposed by most Americans,” read a headline by The Washington Post’s Philip Bump, who wrote that the Senate violates the concept that “all men are created equal.”

These weren’t the only attacks on the role of the Senate.

The Electoral College has been under siege since 2016 when Trump defeated Hillary Clinton despite not winning the popular vote.

But the Founding Fathers didn’t intend for a national plebiscite to elect presidents. Instead, they wanted to preserve federalism by creating the best system of majority rule with a necessary protection of the minority.

.@JarrettStepman gives an explanation to the basis of the electoral college, and its criticisms. #DalyBriefing pic.twitter.com/M7uHWCEAZ8

This new criticism of the Senate falls on similar ground as the attacks on the Electoral College.

The left now portrays the Senate as a dark, Republican conspiracy—another vestige of slavery meant to keep Democrats down and out of power.

The Founders created the Senate for several reasons—no, not to promote slavery or ensure the Democratic Party couldn’t win in 2018. Instead, it was the result of a compromise and the desire to preserve the concept of federalism.

Representatives of small states worried that the interests of larger states would overwhelm them, large states wanted to base representation on population for obvious reasons. The solution, in part, was to create two branches of the legislature—one based on population and one that treats large and small states equally.

The Founders gave these bodies specific powers: the Senate would give advice and consent on executive branch nominees, and the House would control spending.

In this way, our system is mixed, with the House representing “democracy” and the Senate representing the equal power of states within a federal system. The Senate, as the smaller body with longer terms, could also act as the more tempered branch of Congress. This would be set against the more bumptious, tumultuous, and democratic House.

This hasn’t always been the case, but it does show how the Founders were always concerned about placing checks on power. They trusted the people to rule themselves, but feared their power to rule others. They did not want to replace one tyrant with millions of others.

It should be noted that the complaints over the “unfairness” of the Senate’s role confirming Supreme Court justices fails to take into consideration that the court itself—where justices serve for life or on good behavior—is a more or less undemocratic institution.

This was by design. The Founders wanted our government to have democratic elements—like the House—but did not think democracy was a good way to create good government or protect God-given rights, the basis of our constitutional system.

“[D]emocracy never lasts long. It soon wastes, exhausts, and murders itself,” wrote John Adams. “There never was a democracy yet that did not commit suicide.”

Beyond the intentions of the Founders, is there truth in the idea that this system is simply unfair to Democrats? There would perhaps be some validity to it if all small states were predominately Republican.

But the truth is that the composition of the Senate also helps states that are very small and very blue, like Connecticut and Rhode Island. Kyle Sammin explained in The Federalist how the Senate actually helps and hurts both parties and that the narrative that it only benefits Republicans is incorrect.

“[T]he focus on small states as Republican strongholds does not survive even the gentlest scrutiny,” Sammin wrote. “The senators from the 10 smallest states are nine Democrats, nine Republicans, and two independents who caucus with the Democrats. That’s an 11-9 split in Democrats’ favor.”

The fact is, bulldozing the Senate is an all-around bad idea. Worse, it would be more or less unconstitutional. Article V mandates that “no State, without its Consent, shall be deprived of its equal Suffrage in the Senate.”

The odds of small states sacrificing their power is virtually nil. The only real way to get rid of the Senate is if we essentially overthrew the Constitution—though it seems some on the far left wouldn’t have an issue with that these days.

In more practical terms we should be wary before we let poor losers upend our most valuable and enduring institutions for short-term political gain. That is how republics die and tyranny thrives.

Fortunately, our Founders had the foresight to create obstacles to such temporary madness from even the people themselves—barriers like the Senate.